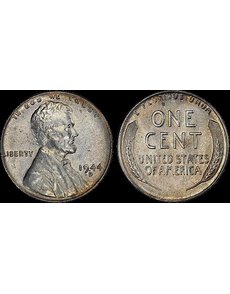 Fewer than eight examples are known for the 1944-D Lincoln zinc-coated steel cent error. The example shown is being offered at auction Dec. 13 by Legend-Morphy Rare Coin Auctions.

The auction, with a maximum of 500 lots, is being held in conjunction with the PCGS Members Only Show at The Cosmopolitan of Las Vegas, 3708 Las Vegas Blvd. S. in Las Vegas, Nev.

The sale will begin at 6 p.m. Pacific Time at the hotel.

The show, running from Dec. 12 through Dec. 14, is open to only Professional Coin Grading Service authorized submission dealers and Collectors Club members.

Called the Regency Auction, Legend-Morphy’s auction is open also to only PCGS Authorized Dealers and Collectors Club members. Bidders must be registered with Legend-Morphy to participate.

The 1944-D Lincoln zinc-coated steel cent being offered is graded by PCGS as About Uncirculated 55 and stickered by Certified Acceptance Corp. as being exceptional for the grade.

Among the other highlights of the Dec. 13 auction:

For more information about the Dec. 13 or other future sales, visit the auction house’s website at www.legendmorphy.com, telephone the firm at 717-335-3435 or email it at info@legendmorphy.com.