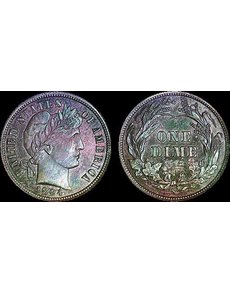 An 1894-S Barber dime has been sold by David Lawrence Rare Coins to Legend Numismatics for a price in excess of $2 million, according to the purchaser.

The announcement of the transaction was made July 17.

“We have no problem stocking a classic rarity like this,” said Laura Sperber, president of Legend Numismatics in Lincroft, N.J.

“In all the years Legend has bought and sold great rarities like the ’94-S dime, none have ever gone down in value. This coin was a no-brainer for us to buy,” Sperber said.

The purchase also helped fulfill a collecting goal of Legend partner Bruce Morelan, who has long desired to own an example of the dime.

Feigenbaum purchased the coin for an undisclosed sum in a private transaction in April. The dime purchased in April is one of three 1894-S Barber dimes that John Feigenbaum and David Lawrence Rare Coins have handled.

Many theories exist as to why 24 Barber dimes were minted in 1894 at the San Francisco Mint. Only nine or 10 are confirmed to exist today (the count of survivors differs by source).

The most widely published theory is that John Daggett, while San Francisco Mint superintendent, had high ranking visitors he wanted to impress with special coins. However, recent research appears to indicate that that theory is myth.

According to the widely published theory, no one knows for sure why Daggett reportedly picked the dime, except that he needed to balance a $2.40 deficit in the Mint ledger, so striking 24 dimes achieved dual purposes. After minting and distribution to his friends and guests, he gave three or four coins to his daughter, Hallie Daggett, the story goes.

At least one of those pieces, according to popular lore, was spent by Hallie to buy an ice cream cone. Known as the “Ice Cream Cone” specimen, the Good 4 coin has not traded hands publicly since 1981, according to Legend.

Numismatic researchers Richard Kelly and Nancy Oliver uncovered evidence — published in their book, Gold In His Veins — The Story of John Daggett, and excerpted in the July 29, 2013, issue of Coin World — that questions the theories involving both Daggetts.

An October 1895 account in the San Francisco Bulletin quotes chief weigher Frank Berdan and chief clerk Robert Barnett as stating that the 24 1894-S dimes were struck June 9, 1894, from uncurrent silver coins that had been deposited for melting and recoining. Three of the 24 were removed for assay.

Berdan, who was responsible for putting coins into circulation, admitted to the newspaper he had purchased a few examples. According to Kelly and Oliver, Chief Coiner Charles Gorham several years later announced he had also purchased several examples. Berdan and Gorham sold their coins eventually to well-known collectors, according to Kelly and Oliver.

At the time the 1894-S dimes were struck, Barnett was supervising the Mint, as John Daggett, stricken with sciatica, was absent from the Mint most of the year. According to Oliver and Kelly, Daggett’s absence suggests he played no role in the production of the 24 dimes. Thus, the story that a young Hallie Daggett was given three of the coins and spent one of them is unlikely, based on the evidence, Oliver and Kelly state. ■