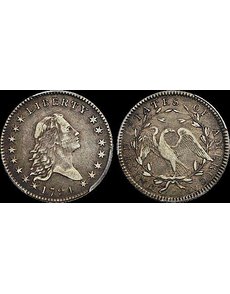 Ten die marriages are known for the 1794 Flowing Hair half dollar, with the Overton 101a die marriage, shown, having the most survivors available to collectors to acquire for their collections of early U.S. coins.

In the beginning the U.S. Mint created only copper coins!

Wouldn’t you think that a fledgling country with its first foray into minting its sovereign coin would opt for gold or even silver?

Legal problems prevented this from happening. The Mint Act of April 2, 1792, required the assayer, chief coiner and treasurer all to post $10,000 bonds to guarantee their honesty.

This was a large undertaking, and none of these officers could afford the bonds to allow them to handle precious metals. So, minting began with the copper coins.

The bond requirements were soon altered to allow the officers to obtain their insurance and precious metal coinage to begin.

Even though three denominations of U.S. coins are dated 1794, only two were actually produced in that inaugural year.

Flowing Hair half dimes, half dollars and dollars are known dated 1794. Regarding the half dimes, Walter Breen, in his Encyclopedia of U.S. and Colonial Coins, notes on page 276 that “The four 1794-dated vars. were struck in 1795; … Mint records show no half-disme deliveries until March 30, 1795 (7,756); most of these were dated 1794 …” So that leaves the half dollar and dollar as the “original” silver issues.

The 1794 silver dollars are among the rarest of regular issue U.S. coinages. All of these dollars were minted with silver deposited by Director David Rittenhouse.

As such, the total mintage of 1794 dollars became his property. So, if you are lucky enough to own one, you can rightly say that it once belonged to Rittenhouse himself. These were delivered on Oct. 15, 1794 (1,758 pieces).

Therefore, silver coin deliveries in 1794 amounted to 7,058 coins with a face value of $4,408. This was a humble beginning for U.S. silver coinage, which would eventually rival any in the world.

Only one die marriage is known for the silver dollar and, as I mentioned earlier, all are very rare and extremely expensive.

That leaves only a half dollar for collectors to purchase to guarantee that they receive a coin from the inaugural year of the silver mintages.

Ten die marriages are known for the Flowing Hair half dollars with most survivors being the Overton 101a variety (Early Half Dollar Varieties: 1794-1836 by Al C. Overton and Donald Parsley).

A collector who sports even one nice 1794 Flowing Hair half dollar in his collection can be very proud of his accomplishment.