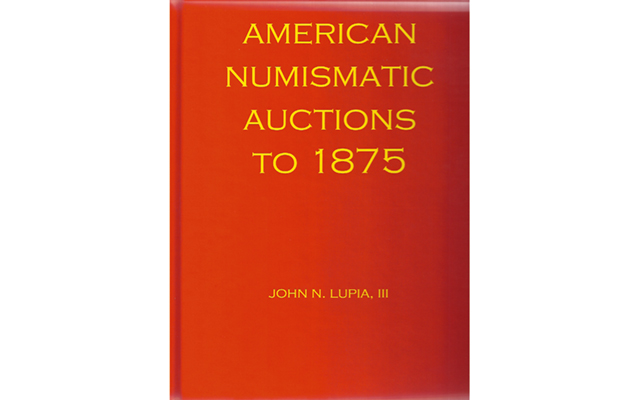 Every 100 years or so, a numismatic bibliography brilliantly illuminates the history of our hobby.

In 1876, it was Emmanuel J. Attinelli’s Numisgraphics, which listed every numismatic auction catalog, book, and price list published in the United States from Colonial times through 1875.

Lupia revises Numisgraphics, adding dozens of publications that Attinelli missed. A comparison of earliest noted auction catalogs will demonstrate what remarkable research Attinelli did for his time, and what a bravura feat Lupia has accomplished in tracing the history of American numismatics back to undreamed-of early days.

In Numisgraphics, Attinelli shared the earliest auction containing coins or medals he could find: the broadside (poster) sale of the collection of Benjamin H. Watkins, of Salem, Mass., in 1828.

I subsequently uncovered two earlier sales: the 1785 broadside selling the collections of Pierre Eugene Du Simitiere — which included one lot of coins and another of paper money — and its resale intact in 1800.

Lupia pushes back the date of the first catalog including numismatic items to the 1758 William Proctor sale of Prussian medals in New York City.

Another of Attinelli’s findings — the first auction in which coins were the main event (as opposed to sales like Watkins or Proctor where coins were part of a larger auction of household items) — was the 1851 sale of the collection Dr. Lewis Roper of Philadelphia.

From 1876 to 2012, no one was able to find an earlier one, but Lupia has, and it is historically significant. The new “pioneer” is the 1813 sale, in Philadelphia, of Phillip Price Jr.’s numismatic collection. Amazingly, within Price’s cabinet was the Du Simitiere collection, still intact 28 years after first going under the hammer.

Lupia’s most remarkable find lies in an area that Attinelli addressed only indirectly: that of numismatic literature in early auction catalogs.

Attinelli’s first mention of “Numismatic Books” is in the Phillip Hone sale of 1852; the earliest numismatic books auction I previously identified was in William Gowans’ Catalog No. 6 (1844), in New York City.

American Numismatic Auctions to 1875 comprises 133 quarto pages of important new information, an essential accompaniment to Attinelli’s immortal Numisgraphics. It retails for $165 from the Regina Caeli Press, which may be a barrier for some, but it contains priceless information available nowhere else.