Late to the party, but collector finally embraces slabbed coins 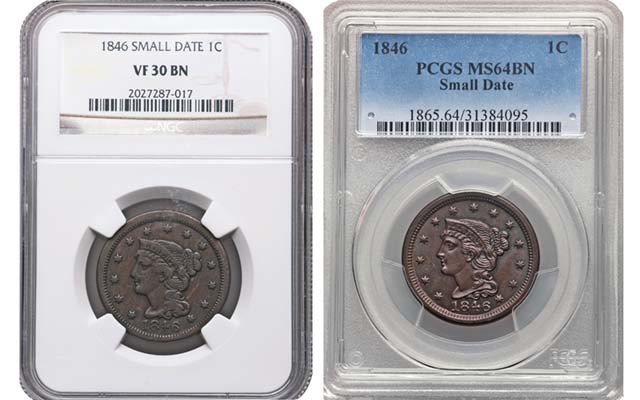 Doug White is from Texas. During a recent visit to London, he attended a coin show at an underground car park at Charing Cross Station, where he found that “collecting brings the same types of people together everywhere.”Like most collectors, I’ve committed several buttons on my smart phone to coin-related apps, including those of the major grading services. I enjoy the price guides and related articles and information they provide.

That appreciation, however, hadn’t extended to the regular purchase of third-party graded coins until recently. Yes, another dinosaur has fallen, and it hasn’t hurt a bit. Ending the “raw coins only” mantra was more a move of necessity than anything else. I had to face the fact that slabs have become the true “trading currency” in today’s rare coin marketplace.

I know that I’m late to the party. Many collectors boarded the third-party grading train two decades ago. I stubbornly resisted. But it’s hard to deny the dominance of slabs when touring a bourse floor today. And it stands to reason that if slabs are what consumers want to purchase, then slabs are what dealers prefer to buy.

A recent regional show reinforced that truth, as my offerings of high-quality but “raw” coins met with generally cold reactions. Two dealers declined to even look them over, saying they only purchased Professional Coin Grading Service- or Numismatic Guaranty Corp.-graded coins. Others were pleased to look, but asked why I’d never had the coins graded. One dealer was particularly candid, saying that his customers were often suspicious of raw coins, believing that the lack of a slab might indicate some problem, or a past cleaning, or some alteration issue that made their purchase feel risky. The fact that my offerings were copper coins added fuel to the fire.

The lesson? If future liquidity of your collection is important, a grading service opinion has become essential in the marketplace.

I long held the belief the shift from raw to slabs would temper collector hunger for education about a series or about particular coins within a series. After all, buying raw requires personal judgments about condition, rarity, and value. But my concerns now seem unwarranted. PCGS, NGC and others relay detailed information about varieties and condition issues on their labels and in their Web content. In-depth information has never been easier to access and, as a result, collectors are developing an increased appreciation for the nuances of coins and series. That deepened appreciation should help sustain collecting interest over time.

So I’ve decided to accept that my collection will forever be a combination of cardboard mounts and bulky slabs. Over time, the slabs will become more and more dominant. In the meantime, my mismatched children seem to be coexisting nicely. What I’ve lost in display aesthetics, I’ve more than balanced in liquidity that keeps me in step with the times.