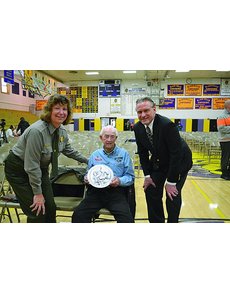 A native of Keystone, S.D., Clifford worked on the memorial in 1938, 1939, and 1940, focusing on carving portions of the portraits of Presidents Abraham Lincoln and Theodore Roosevelt.

Clifford began his work at the age of 17, although he had tried over the previous two years to get sculptor and project master Gutzon Borglum to hire him. Clifford’s eventual break came when Borglum assembled a number of the memorial’s workers into a baseball team, the Mount Rushmore Memorial Drillers.

Clifford signed on as an ace pitcher and outfielder before his perseverance resulted in his being hired by Borglum.

Clifford penned his experiences in his self-published book, Mount Rushmore Q&A: Answers to Frequently Asked Questions. The book can be found online at www.mountrushmorecarver.com.

First Interstate Bank from Custer conducted the coin exchange, during which 1,500 40-coin rolls of Uncirculated, circulation quality quarter dollars were exchanged for cash.