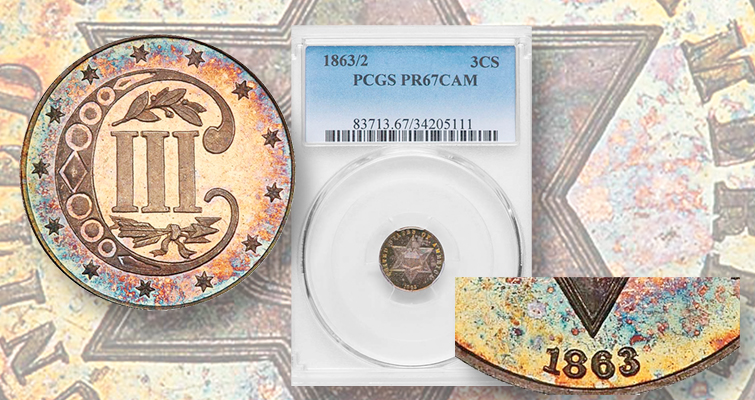 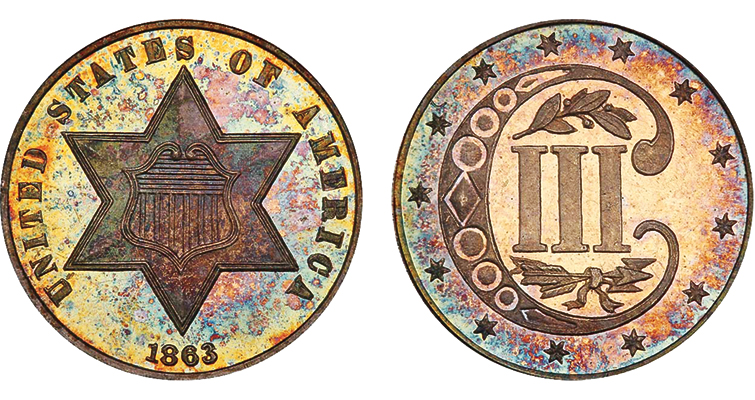 The identity of the underlying numeral in the date on the Proof 1863/2 3-cent silver piece is uncertain, so there is debate over whether the variety is a true overdate or a repunched date. 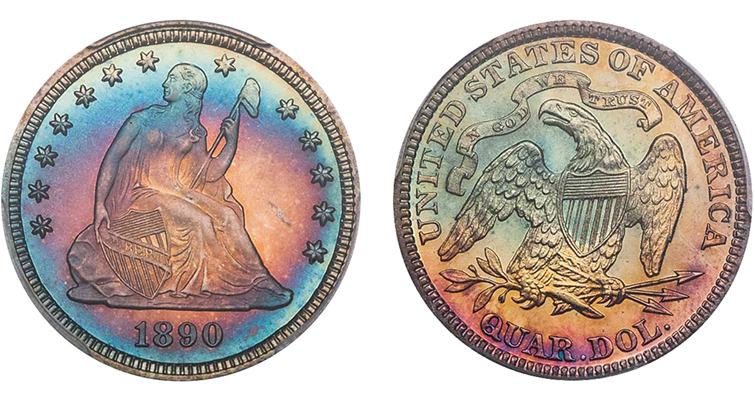 Among coveted smaller-denomination Proof coins to be offered in Las Vegas is an 1863/2 silver 3-cent piece graded PCGS Proof 67 Cameo that is tied with another example as the finest graded at PCGS. Legend writes that it believes its quality should merit a CAC sticker, though acknowledging, “There is one area where there it a die chip and a small line which can only be seen with a strong glass (and maybe why CAC did not bean it).” Both sides show rich toning in a mix of jewel tones.

The variety — with the diagonal of what some believe is a 2 seen below the 3 in the date — has a reported mintage of 460 pieces and was probably first recognized by researcher Don Taxay in 1962. The die variety is known to collectors only as a Proof coin.

Some researchers, including Walter Breen writing in his 1988 Proof Encyclopedia, believe that the variety is a restrike issue, struck in 1864, since the reverse die exhibits a die crack seen on circulation strikes of 1864 3-cent silver pieces. Current research is mixed as to if it is a true overdate or a repunched date. The “Red Book” (A Guide Book of United States Coins) calls it “1863, So-called 3 Over 2” but as Heritage observed in its June 2014 offering of a PCGS Proof 66 Cameo example with a green CAC sticker from the Gene Gardner collection for $47,000, this, “certainly seems to be an abundance of caution.” Heritage’s wrote in the lot description accompanying the Gardner “trime” that, “There is quite clearly something there, and the something certainly appears to us to be the downstroke of a 2. The difference of opinion seems to be whether the underdigit is merely repunching of an 1863 date logotype, or portions thereof.” Legend estimates its offering at $50,000 to $55,000.

One of the most beautiful Proof coins in the auction is an 1890 Seated Liberty quarter dollar graded PCGS Proof 68 and possessing a green CAC sticker. By 1890 the Seated Liberty series was winding down, soon to be replaced with Barber’s design in 1892, and the Philadelphia Mint struck 590 Proof quarter dollars in 1890, alongside a very low 80,000 circulation strikes.

Legend writes in its typical exuberant tone, “WOW! What a magnificent SUPERB GEM Proof quarter. Eye-popping, bold blueberry, apricot, and tangerine hues blend over brilliant, watery reflective mirrored fields. The seductive eye appeal grabs your attention from across the room and once you have this coin in your hand, you will not want to put it down! The eye appeal is exceptional, the quality is flawless and VERY HIGH END!”

It was previously offered at Heritage’s June 2014 Gene Gardner auction, where it sold for $18,212.50 and was described as “among the most stunningly toned coins in the entire Gardner Collection,” and, “one of the most beautiful Seated type coins of any denomination we have ever seen.”

It is one of three like-graded coins at PCGS, where another three examples of this date are graded as Proof 68 Deep Cameo. Numismatic Guaranty Corp. has also certified several submissions Proof 68 and Proof 68+, along with one Proof 69 Cameo piece. While the issue has a relatively high survival rate and is often used to represent the type, Heritage warns, “Given the high survival in high proof grades, it is clearly a late-series issue that was saved in some quantity. But statistics are one thing; aesthetics are quite another.” At Legend’s offering it is estimated at $14,000 to $16,000. 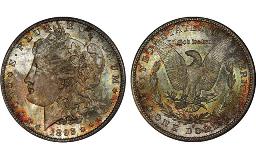 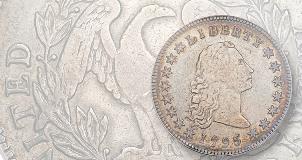