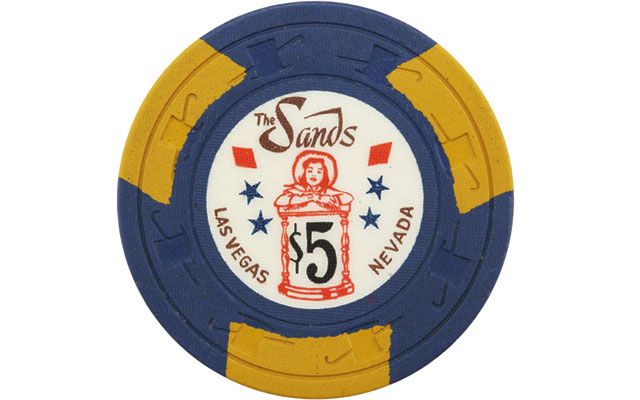 One of the rare chips from The Sands casino is a $5 ninth-issue piece that was used in the late 1950s.

While you can find gambling casinos in just about every state and every Indian “reservation” now, time was that Nevada was all there was for legal gambling and Las Vegas was its capital.

The city’s strip had glitz, light bulbs and Vegas Vic, an animated neon sign of a waving cowboy. Legendary casinos like the Sands, Desert Inn, Last Frontier and Flamingo drew convention-going otherwise straight-laced businessmen and high rollers from the coasts.

The Rat Pack featuring those kings of cool, Frank Sinatra, Dean Martin, Sammy Davis Jr., Joey Bishop and Peter Lawford, was born at the Sands in 1960 when the five performed together at the hotel’s famous Copa room while in town to film Oceans 11.

About the same time, three winning betters took $5 casino chips home as souvenirs. While those $5 chips had the buying power of about $40 in current money, they’re worth $25,000 and more to collectors today.

Casino chip collecting is one of the hottest spots in exonumia, with prize disks fetching outsize prices.

Sands chips, because of their history, coolness and rarity, top the price guides. The most expensive chip, a $100 Sands token, fetched $145,000 several years ago.

One of the rarer Sands chips is a $5 ninth-issue piece that was used in the late 1950s. It was blue with three mustard-colored inserts at the edges. In the center of both sides was a white disk showing the Casino’s trademark cowgirl leaning on an hourglass, four stars, two diamonds, the words THE SANDS / LAS VEGAS NEVADA and the denomination.

Collectors know of three undamaged pieces and one that was holed, apparently by the casino. Heritage Auctions reports that casinos often made key chains for tourists out of withdrawn chips.

In 2010, a Very Slightly Used (chip collectors have their own grading system) chip sold for $26,290 at auction. The piece fetched the highest price of some 60 chips at Heritage’s first sale of casino chips.

Antique Trader magazine noted in a preview of the sale, “This ‘hourglass’ chip features one of the best-known vintage Vegas logos; it was used in advertising and promotion throughout the 1950s and was a very appropriate emblem back when Vegas was a Western-themed town.”

The casino, which was once owned by reclusive billionaire Howard Hughes, was razed in 1996 to make way for the Venetian.

Dozens of Venetian chips are listed on eBay at any one time, with most attracting no bids.

Counterfeit chips, too, can be a problem.

During the summer of 2013, Rear Adm. Timothy M. Giardina was fired as deputy head of the U.S. Strategic Command (formerly know as SAC) in the early stages of an NCIS probe into what was recently revealed as counterfeit chips.

In May 2014, Giardina was convicted of two counts of conduct unbecoming an officer for passing fake gambling chips and lying to an investigator about it. He was issued a written reprimand and ordered to forfeit $4,000 in pay.

Giardina, known to poker dealers at the Horseshoe casino in Council Bluffs, Iowa, as “Navy Tim,” was caught using three phony chips in June 2013. The Associated Press reported, “Investigators said they found his DNA on the underside of an adhesive sticker used to alter $1 poker chips to make them look like $500 chips.”

Giardina, who spent about 15 hours a week at the casino’s poker table before being banned for life, says he didn’t make the fakes or even know the chips were fake.

Obsolete currency collectors are familiar with that kind of fake. Before the Civil War, when the U.S. government started issuing its own paper money, sharpies would “raise” the denomination of bills by pasting new numbers over the denomination on privately issued paper money.

In those days, when each bank issued paper money of its own design, the deception was not easy to tell. Contemporary newspapers frequently had articles warning merchants about the bills.