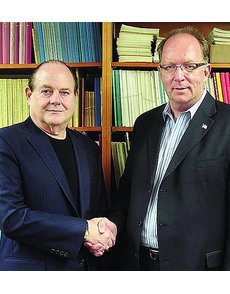 Owner and president Harlan J. Berk said Shepherd joined his firm Sept. 23, three days after the ANA Board of Governors voted to end the association’s “working relationship” with him.

“Larry’s unquestioned integrity and extensive knowledge of rare coins and the coin market allows us to supply our customers with an even larger inventory of high quality coins to choose from,” Berk said.

“We feel this will enable us to move into the top tier of U.S. coins, which we have occupied in the field of ancient coins for the last several decades. Additionally, Harlan J. Berk Ltd. is able to provide Larry’s clients with a wide array of numismatic products and services,” Berk added.

Harlan J. Berk Ltd. is located in Chicago’s downtown business and financial district. Its facilities include a ground-level retail store and gallery on Clark Street. The firm buys and sells ancient coins and also U.S. coins and paper money at most major coin shows and conventions in the United States.

Shepherd grew up in Claremont County, Ohio (east of Cincinnati). He began collecting coins from circulation at the age of 10.

Prior to his three-year stint as ANA executive director, Shepherd owned and operated Shepherd Investment Management Company, and its subsidiary SIMCO Numismatics, which he founded in 1989.

Shepherd said he is “... thrilled to join such a well rounded team of experts.”

He added: “Harlan and the staff at HJB have an outstanding reputation for honesty, integrity and expertise across a broad spectrum of numismatic fields. I look forward to working closely with Mike Printz, who I’ve valued as a close, personal friend and have respected for his client oriented expertise for nearly 20 years. The opportunity to work closely with Mike, Harlan and the rest of the staff was a strong incentive to join the firm.”

For the immediate future Shepherd will work from his home in Colorado Springs, Colo., but will be working closely with the Chicago staff and also travel on behalf of the firm.