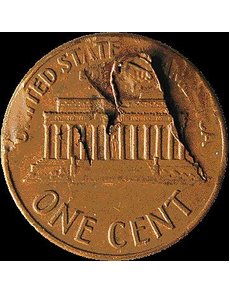 A large irregular lamination flap is lifting up from the reverse face of this 1970-D Lincoln cent. This is considered a simple lamination error. 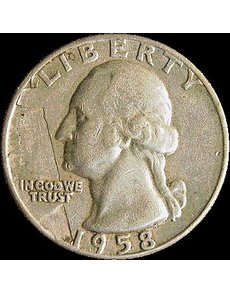 Two lamination flakes — one large and one small — spalled off the left side of the obverse face of this 1958-D Washington quarter dollar after the strike. 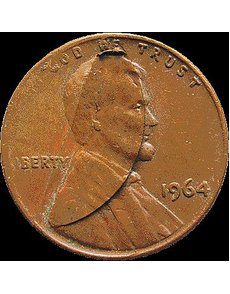 A large semilunar lamination flap lifted up and folded over onto what would eventually become the obverse face of this 1964 Lincoln cent. The flap was retained after the strike. 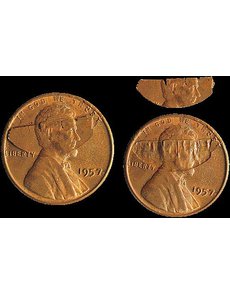 A semilunar lamination flap was folded over onto the obverse before this 1957 cent was struck, above. The flap broke off after the strike but was recovered, above right and immediate right. 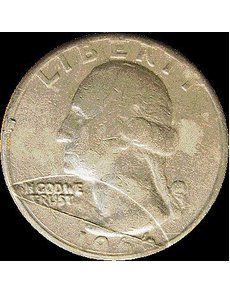 A folded-over semilunar lamination flap (now missing) left behind a matching struck-through error on the obverse face of this 1966 Washington quarter dollar. Lamination errors that develop within clad layers are quite rare.

Flaps of delaminating metal can remain attached to a coin, as seen on the reverse of the illustrated 1970-D Lincoln cent.

They can also fall away, as on the obverse face of a 1958-D Washington quarter dollar shown here. In this example two lamination flakes spalled off the surface after the strike, one above IN GOD WE TRUST and one below the motto. Flakes can also detach themselves from a planchet before the strike, although evidence of this is often erased by the die’s impact.

Lamination errors are generally restricted to solid-alloy coins. Many owe their presence to contaminants in the alloy that cause separation along the horizontal plane. As evidence of this, you can sometimes see dark discoloration in the floor of the recess left by the missing flake.

Lamination errors can also be a side effect of an improper alloy mix, where the constituent metals are not thoroughly blended. Separation occurs at the boundary of light- and dark-colored bands.

Simple lamination errors like those depicted on our first two coins are relatively common and have only slight market value. Value and eye-appeal is enhanced when a large lamination flap folds over before the strike, and especially when that flap is retained.

A lamination flap that starts at the edge of a planchet and bends over will typically leave a semilunar (shaped like a half-moon) depression in the coin after the strike. If the flap is retained, the resulting semilunar wafer carries a die-struck design on its outward-facing surface.

A straightforward example of such an error is seen here on a 1964 cent. A semilunar flap — bent over, struck and retained — can be seen on the left side of the obverse face. The word IN and the first few letters of LIBERTY were weakly struck because this part of the coin was left thinner than normal by the dislocation of the flap.

A similar error appears in the accompanying 1957 Lincoln cent. The flap broke free after the strike but was recovered. Removing the flap exposes a semilunar depression (a struck-through error) with blurred design elements.

Another struck-through error left by a semilunar lamination flap can be seen on the obverse face of a 1966 Washington quarter dollar. This coin provides an exception to the general rule that lamination errors are associated with solid-alloy coins. This coin has a copper-nickel clad composition. The outer clad layer, while thin, can still experience separation internally along the horizontal plane.

Here a flap lifted up from the superficial levels of the planchet’s clad layer and was folded over onto what would eventually become the obverse face. The flap was lost after the strike, leaving behind a shallow depression with slightly blurred design elements. The strike is weak where dislocation of the flap left the planchet thinner than normal.

Semilunar lamination flakes — or any lamination flake for that matter — can separate from one planchet and end up being struck into a different planchet. Irregular flakes seem to be a fairly common source of struck-through errors. In the case of a large, thick flake that’s embedded in, or missing from a coin, a precise weight will often tell you whether the flake was respectively added to or subtracted from the coin. Loss or addition of a small thin flake will have a negligible effect on a coin’s weight. All of the coins presented in this column have weights that lie within the normal range of variation for their denominations.