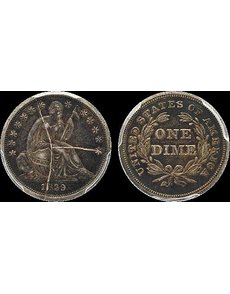 Terminal die state of the 1839 Seated Liberty dime with shattered obverse die is known by just five examples, one of which was identified only in August.

Serious coin collectors and researchers well know the thrill of the hunt; locating a coin for one’s collection that appears to be out of reach.

Collectors and dealers recognize my expertise in the Seated Liberty dime series as a result of a die variety Web book at www.seateddimevarieties.com/. This numismatic reference guide was launched in 2004 and is constantly updated.

While publishing the Seated Liberty dime Web book, I also created a Top 100 Liberty Seated Dime varieties set to encourage collectors to discover the pleasure of hunting down special die varieties. The Top 100 set contains some common varieties for the beginning collector and several Rarity 7 to R-8 level varieties to challenge the most advanced specialists.

The rarest variety in the Top 100 set is the F-105b Pie Shaped Shattered Obverse 1839 Seated Liberty dime with only four examples identified from the late 1970s through August 2012. Recently, I received a phone call from a Celina, Ohio, collector announcing the fifth example of the variety, whose discovery brought an end to my personal search to upgrade a Professional Coin Grading Service Good 6 example held since 1992.

What is this Pie Shaped Shattered Obverse variety of the 1839 Seated Liberty dime all about, and why is it so rare? To respond to those questions, we need to return to the 1970s and an opera singer turned coin dealer named Kamal Ahwash. Kam Ahwash was instrumental in the founding of the Liberty Seated Collectors Club in 1974 and publishing the first Seated Liberty dime reference in 1977, titled Encyclopedia of United States Liberty Seated Dimes 1837-1891. Included in Kam’s encyclopedia was an early effort to identify special die varieties.

One of those varieties was an 1839 dime with a spectacular shattered obverse listed as 1839 Ahwash 2 and grading About Uncirculated or better. Little was known about the variety, with Kam eventually selling the dime to a well-known dime collector named Allen F. Lovejoy. In 1990, Stack’s auctioned the Lovejoy Collection and the “1839 Pie” (as specialist collectors call it today) was purchased by Brian Greer for inclusion as a plate coin in his guidebook titled The Complete Guide to Liberty Seated Dimes.

After acquiring the Ahwash/Lovejoy 1839 Seated Liberty dime variety, Brian revealed the existence of a second example, grading Good, in his collection. I purchased that coin during 1992 and held it as a prize in my Top 100 variety collection until November of this year.

Research published at www.seateddimevarieties.com/ suggests that the obverse die used to strike the 1839 dime was improperly annealed and cracked quickly upon striking 1839 coinage. Three separate die states are known: an early die state (F-105) without die cracks; a middle die state (F-105a) with a strong die crack starting from the rim below the date and proceeding up through Liberty’s shield; and the terminal die state (F-105b) where the die is severely cracked from bottom to top and from die center to right forming a pie with three distinct pieces.

I believe the obverse die cracked quickly upon entering production, since all three die states are rare. The early die state is estimated at Rarity 6 in Very Fine grade or better and the middle die state at Rarity 7. The terminate die state is likely the most sought after die variety in the Seated Liberty dime series!

During late August, Celina, Ohio, attorney and collector John Sacher phoned me and reported the discovery of the rare 1839 variety in his “Red Book” collection, based on information from my website. Several conversations with John ensued. John indicated the dime was probably Extremely Fine or better but with darker surfaces. Importantly, it was for sale. We agreed that the dime would be first submitted to PCGS for verification and grading prior to a purchase discussion. John also emailed several images of the dime confirming the terminal die state.

On Oct. 13, John called to announce the dime had been graded and now sat in a PCGS EF-45 holder. A brief pricing discussion occurred resulting in a mutually agreed-upon financial transaction that was to remain undisclosed.

Gerry Fortin is a specialist in Seated Liberty dimes and author of the Web reference book posted online at www.seateddimevarieties.com/.