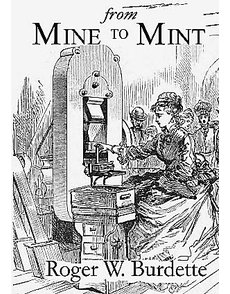 Book cover image courtesy of Roger W. Burdette.Roger Burdette’s new book From Mine to Mint — American Coinage Operations and Technology 1833-1937, developed out of frustration with the inability to find reliable, detailed information on how the U.S. Mints operated and the technology they used.

My newest book, From Mine to Mint — American Coinage Operations and Technology 1833-1937, developed out of frustration with the inability to find reliable, detailed information on how the United States Mints operated and the technology they used. Available information was scattered and repetitive, or sometimes contradictory.

While reviewing published coin literature, I kept finding more questions than answers. Coin presses and striking were described in very general terms, but nothing seemed to tell me how pressure was adjusted or how dies fit a certain kind of press. Even the most basic of descriptions confused Franklin Peale’s toggle-press with others made in France and Germany. Well-known published sources often disagreed on when and how something was done, or glossed over discrepancies. Activities as routine as rolling ingots or manually adjusting planchets remained obscure, and the Mint’s regulations offered no help in understanding how and why certain operations were performed. Some subjects, such as parting and refining gold and silver, were explained in non-numismatic publications that rarely applied the processes to practical coinage production.

More than a decade ago, while researching the three Renaissance of American Coinage books, I discovered documents that offered insights into production of Proof coins, 1907 pattern pieces and details of model reductions. Over the years, further research led to additional discoveries of descriptions of Mint equipment and operations that were largely unknown to collectors. The outcome is a new book titled From Mine to Mint — American Coinage Operations and Technology 1833-1937.

The coins we collectors examine and appreciate are products of their times. They were made with the machinery, technological knowledge and materials available to Mint workers of eras quite different from our own. By understanding the equipment available to the Mints, the ways it was used and the operating procedures in force at any particular time, we can better understand how and why coins possess certain features. Overdates, repunched lettering, striking errors and many other defects can be fully understood only if we have a clear vision of the technology used to produce coins.

The beginning date of From Mine to Mint, 1833, is the year a new Mint opened in Philadelphia. It is a convenient starting point that permits a little backward look, but largely points the way forward. As an end date, 1937 would seem an unusual choice; however, it is the year Mint Director Nellie Tayloe Ross showed she understood how the Mints were operating and the year she exerted her authority for fundamental change in accounting and protection of America’s treasure.

This period covered in the book saw the gradual technological transition of our Mints from steam power to electricity; from wood and coal furnaces to methane gas and electric induction heating; from self-contained mechanical factories to commercially dependent producers; from practical mechanical organization to standards-based operations. Thus, it was in this time that the Mints came to maturity in parallel with American expansion, manufacturing and nationalism.

With access to From Mine to Mint, collectors, numismatists, scholars and historians can develop a much better view of how the United States Mints operated. This will help other researchers refine their knowledge of how defects occurred and why the Mints operated in seemingly illogical ways.

Thus, my goal was to present how the Mints really worked. In essence, From Mine to Mint is a mini-encyclopedia of U.S. Mint technology and operations of the 19th century and first part of the 20th century.

Roger W. Burdette is the author of multiple books on numismatics, including the award-winning, three-volume work Renaissance of American Coinage.