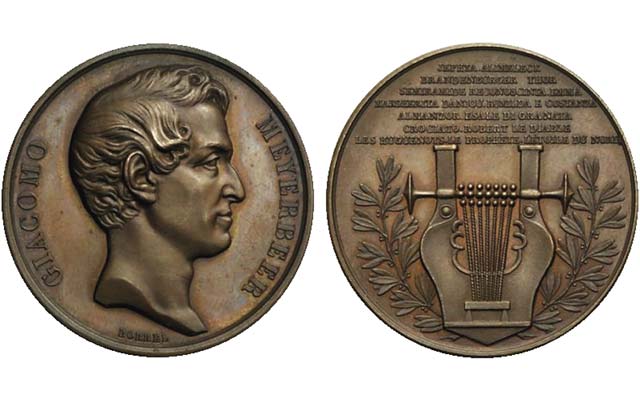 The wonderful thing about numismatics is that when we delve into virtually any coin, medal or token, we often discover one or more fascinating stories.

In particular, topical collecting allows us to combine numismatics with our other interests, such as archeology, ornithology, optometry, paleontology, or — as with the current topic — musicology.

In Steve Roach’s editorial in the May issue of Coin World, he asked the question: “Why is one [opera composer] remembered (Wagner) and the other all but forgotten? The answer is the difference between good (Meyerbeer) and great (Wagner).”

This statement aroused my curiosity. I know that Meyerbeer was Jewish and that Wagner was a notorious anti-Semite. I am familiar with Wagner’s works but, frankly, I don’t recall ever hearing anything by Meyerbeer.

I enjoy doing research, and discovered an interesting story in Wikipedia that at least partially explains why Meyerbeer’s works are rarely performed today — and it may have little to do with their quality:

The article relates that Meyerbeer was a successful composer but that, following his death in 1864, Wagner and Wagner’s supporters became strong critics of the Jewish composer. Later, the Nazi regime suppressed his works, and even after the Nazis were defeated, Meyerbeer’s works remained largely ignored in Germany.

While Wagner’s music might be considered great, as a person he was lousy. And only time will tell how Meyerbeer’s works will be considered in the pantheon of music — as the anti-Semitic attacks by Wagner and his friends fade away. After all, Bach — who is now universally recognized as one of the greatest composers of all time — was all but forgotten until Mendelssohn revived him. Mendelssohn was also attacked by Wagner in a notorious and poisonous essay, “Jewishness in Music.” In it, Wagner said that Mendelssohn “has shown us that a Jew can possess the richest measure of specific talents, the most refined and varied culture ... without even once through all these advantages being able to bring forth in us that profound, heart-and-soul searching effect we expect from music.”

The Meyerbeer Fan Club website (www.meyerbeer.com) indicates: “The operas of Meyerbeer, though wildly successful in his time and for fifty years following his death, have virtually disappeared from the major opera venues. His Les Huguenots, for example, was performed 1,000 times at the Paris Opera before the turn of the century (in only 64 years), an unheard of total, even by the standards of our own time. By comparison, Puccini’s La Boheme, which is considered the most popular opera of all time, only recently passed the 1,000 performance mark at the Metropolitan Opera in New York, but only after nearly 100 years.”

The May 7, 1864, edition of The Spectator carried this news item: “The death of Meyerbeer the great composer is announced this week. Like many great composers, he was a Jew, the son of a banker of Berlin, and very wealthy. He has left one great opera, Africaine, finished and ready for the stage, having waited years for a soprano voice able to execute one part to perfection.”

In conclusion, I think that Steve Roach should have picked on another so-called “good” composer. Meyerbeer was considered great in his time and nothing that Wagner or the Nazis did or said should take that away from him. But I thank Steve for opening the doors to me (and the readers of this article) on a fascinating adventure.

Lastly, my curiosity was aroused enough to listen to some of Meyerbeer’s music on www.juzp.net and to see what numismatic remembrances of Meyerbeer there are. There don’t appear to be any commemorative coins, but I did discover two art medals. One was a 34-millimeter bronze by Valentin Maurice Borrel offered for under $75. The other, priced at $2,500, was created by David d’Angers in 1842.