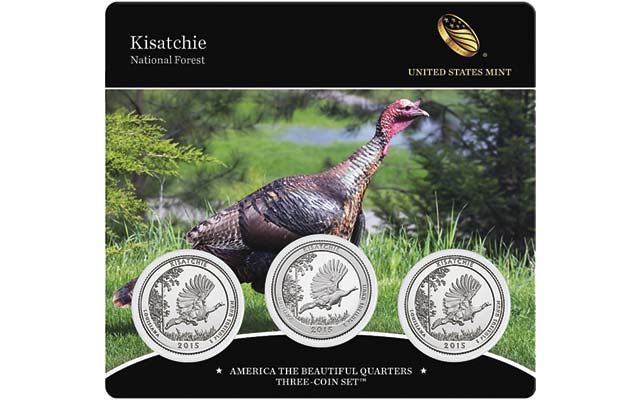 The set, offered at $9.95 each without ordering restrictions, contains one Uncirculated Mint set quality quarter dollar each from the Denver and Philadelphia Mints and one Proof quarter dollar from the San Francisco Mint. The coins are all struck in copper-nickel clad composition. The coins bear the D, P and S Mint marks of the respective facility at which the coin was struck.

The reverse of each coin bears a design recognizing Kisatchie National Forest in Louisiana. The Kisatchie coin is the 27th of 56 coins authorized to be issued under provisions of the America the Beautiful Quarters Program. National parks and historical sites are being recognized in the 50 states, the District of Columbia and the five U.S. territories of Guam, American Samoa, U.S. Virgin Islands, Commonwealth of Puerto Rico and the Commonwealth of the Northern Mariana Islands.