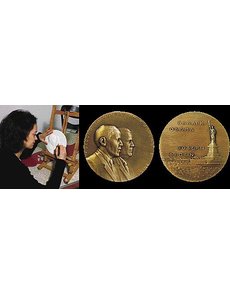 Sculptor Amy Kann works on a model for the obverse of her medal marking the second inauguration of President Obama and Vice President Biden. The medal, also shown, is being marketed with the assistance of Kickstarter, which she describes as being very helpful to her project.

I have sculptured portraits all my life. I began to use the bas-relief technique in 2001. In 2010, I was commissioned to sculpture the Brookgreen Gardens Medal. This opened up a new direction for me, and I’ve been making medals since then.

I was honored to be invited to compete for the 2013 Obama inaugural medal by Medalcraft Mint, one of three mints asked to propose artists. The companies invest a great deal of time and resources to actually produce finished medals in order for the Democratic National Committee to make its choice. Very few artists are chosen.

Each artist brings his or her style and aesthetic to a medal. My medal differs from the official one because my work is greatly influenced by European 19th century medals, and those of the great Augustus Saint-Gaudens. In fact all of my work as a sculptor has been influenced by the master sculptors of the 19th century. I tried to bring these admired aesthetic qualities to this medal. The letters are hand carved in the 19th century tradition, which gives the medal a timeless elegance that I prefer to the machined letters used in most modern medals.

My goal when sculpturing the portraits was to capture Mr. Obama’s and Mr. Biden’s intelligence, determination and humanity. I wanted very much to capture Mr. Obama with a sensitively rendered portrait rather than to rely on a more caricature-like resemblance. I wanted the portrait to be a study of the actual man with his very subtle features, rather than a portrait which relied on exaggerating those features. I think he is a very open and accessible president so I wanted to show that in his expression. The smallest change made a big difference when trying to capture that. I offset the portraits in the composition to express a progressive ideology, as they look toward the future.

I was very happy with my Obama/Biden medal, but I had no idea how to go about offering it for sale after I learned that it would not be chosen as the official medal. I was reluctant to invest in a quantity of the medals and then try to see if I could sell them. A friend suggested Kickstarter.

Reluctant at first, I soon realized that this was actually a good idea. I wouldn’t be showing the medal to coin collectors per se, but given the enormous growth and popularity of social media I would have a huge audience. Sure enough, Kickstarter turned into a valuable networking tool. It was easy; the project was up and online a week after I first looked at the Kickstarter site.

I was able to suggest to all my Facebook friends that they take a look. Then their friends did. Kickstarter affords the possibility of exponential visibility. I’m halfway through the time period allotted and I’ve brought in four times the investment I originally requested. I would definitely recommend it to other artists as a vehicle for obtaining investors to back projects.

Amy Kann is a sculptor based in Narberth, Pa.