Kicking it up in Baltimore 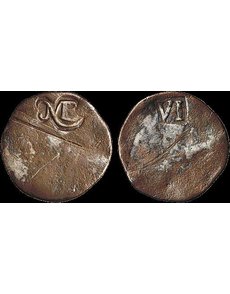 The most important auction lot associated with the Colonial Coin Collectors Club was this 1652 New England sixpence that sold for a record $431,250. It is the most valuable American coin found with a metal detector.

After years at the Bay State Coin Show in downtown Boston, the Colonial Coin Collectors Club moved its annual convention to Baltimore this year at the Whitman Coin and Collectibles Expo.

C4 (www.colonialcoins.org) is almost 20 years old and has never been healthier, with good leadership, an active membership and an excellent periodical, the C4 Newsletter. Its convention, held from Nov. 15 to 18 this year, saw strong attendance, with a room-capacity crowd at the educational forum, several specialty dealers in a dedicated C4 section of the enormous Baltimore bourse floor, and perhaps the most important C4 auction in the club’s history.

Whereas past C4 auctions have been private, members-only events, the club, led by President Jim Rosen, made the decision this year to join with Stack’s Bowers Galleries for the auction, hoping to reach out to Colonial collectors who aren’t yet members of the organization. The auction ended up being the most newsworthy event in the club’s history, with the name of the club even splashed in articles in the major Long Island newspaper, Newsday, and distributed nationwide by the Associated Press.

The big star of the auction was a New England sixpence, struck in 1652 and dug up by a metal detectorist in a potato field on Long Island in 1990. Its discovery, authentication and subsequent sale in 1991 for $35,200 made headlines in Coin World, other numismatic periodicals and the mainstream press, even meriting a drawing and exclamatory caption in a Ripley’s Believe It or Not! feature. In the C4 auction, it netted $431,250, making it the most valuable American coin ever found with a metal detector.

As just the second lot in the auction, it set the pace for the presentation of the long-off-the-market rarities from the Jack Royse Collection and the Ted Craige Collection.

Royse, 86, a private collector from the Midwest, assembled a high quality Colonial type set between the mid-1960s and today, with special attention to certain series like state coppers and Machin’s Mills halfpence.

Craige was an advanced collector and part-time dealer who died in 1971. His collection, hidden from view ever since, has become the stuff of legend among Colonial specialists, and palpable excitement was felt in the room as his Saint Patrick’s and Voce Populi coppers, 1721 to 1722 French Colonies 9-denier coins and selected other pieces were sold in highly competitive bidding.

The best part of the C4 convention is the chance to talk to other dedicated collectors and researchers of the coins and medals of early America.