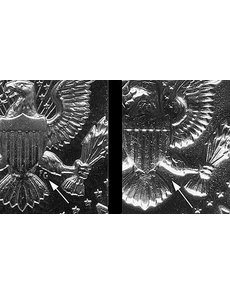 The reverse detail of an early die state Special Mint set 1966 Kennedy half dollar, above left, shows the FG initials of Assistant U.S. Mint Sculptor-Engraver Frank Gasparro intact. Above right is an SMS 1966 Kennedy half dollar without the initials. In addition to the missing initials, a lot of the wing feather detail is also absent on this coin.

When properly-made coinage dies first are put into use, they can impress coins with crisp and full detail. During the minting process, dies crack, clash into each other and fatigue as a result of heat and stress. Sometimes, dies are taken out of service and relapped, or polished anew, to extend their useful life.

As a consequence of all these factors, “late state” dies produce coins that have only shallow or even mushy, indistinct detail. Once in a while, they produce a collectible variety. That’s exactly the case with the popular and controversial Kennedy, No FG half dollars.

Like all current U.S. coins, the Kennedy half dollar includes the initials of its designer. FG appears on the coin’s reverse, in the small field area between the eagle’s tail and left leg. They are the initials of Frank Gasparro, who designed this coin while serving as assistant engraver at the U.S. Mint. He later became chief engraver in 1965.

The initials are small and in low relief. When the reverse die is polished excessively, this subtle detail is inadvertently erased.

This has happened at least three times, yielding three collectible Kennedy, No FG half dollars. The first time was in 1966 during production of the Special Mint set (SMS) Kennedy half dollar.

The SMS 1966 Kennedy, No FG half dollar features an extremely overpolished reverse. Not only are the initials absent, but much of the central detail of the eagle’s left wing is also missing.

In 2008, a certified Mint State 66 example cost as little as $50. Today, a similarly graded coin trades for more than $500 due to registry set collecting and widening general interest. Over-polishing again occurred in 1972, this time at the Denver Mint. The 1972-D Kennedy, No FG half dollar exhibits coarse polish lines throughout the field area, obliterating detail in the area of the initials. This variety is scarce and only a handful have been graded by the major services.

Last, in 1982, at the Philadelphia Mint, the same events occurred. While overpolished, the 1982-P Kennedy, No FG half dollar is better made than its 1972 counterpart and also immensely more common. It is still a very popular adjunct for collectors building a Kennedy half dollar set. But these varieties are all controversial. Dies are meant to wear during use, and some loss of detail is tolerated by the Mint. Thus, many Kennedy half dollars show weak or partial FG initials.

Only these three varieties have caught on and are sought-after today. But other No FG dates have been reported, including 1983-P and 1988-P coins. To qualify as a true and collectible No FG Kennedy half dollar, a coin must be struck from dies with no trace of the designer’s initials whatsoever.