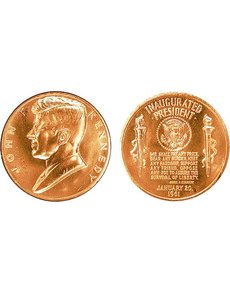 A reader’s mystery piece appears to be a John F. Kennedy inaugural medal struck by the U.S. Mint. These brass-composition pieces carry little premium value in the secondary market.

A friend at work got this coin from somewhere (she doesn’t remember where). I have never seen one like this, but I am guessing it is an Inauguration coin. It is heavier than a Morgan dollar and thicker too, but not quite as large.

This appears to be one of several versions of the U.S. Mint’s John F. Kennedy inaugural medal. Current versions are composed of brass (90 percent copper, 10 percent zinc, what the Mint calls “bronze”).

The obverse of the Kennedy inaugural medal was designed by Mint Chief Engraver Gilroy Roberts; Frank Gasparro, then an assistant engraver, designed the reverse. After Kennedy’s assassination in Dallas in 1963, Roberts’ obverse portrait of Kennedy on the medal was adapted for use on the Kennedy half dollar.

Over the years, the Mint has offered a diverse assortment of medals, featuring not only U.S. presidents but famous athletes, actors and humanitarians, among others. Some are struck under the Mint’s own authority, such as the issues in the Presidential medal series. Others are categorized as “bronze duplicates” of congressional gold medals, specifically authorized in the legislation authorizing the gold medals presented to individuals and groups. Beginning in 2007, as ordered by Congress, the Mint began striking another category of medal — bronze duplicate medals of a coinage series, for the First Spouse gold $10 bullion coins, which duplicate the obverse and reverse designs of the coins (but not the coinage legends).

The diameters of the Mint medals typically range from 1.3125 inches to 1.5 inches to 3 inches. As this Kennedy medal is described as slightly smaller in diameter than a Morgan dollar (which is 1.5 inches in diameter), it would be one of the 1.3125-inch pieces.

The Mint currently offers 1.3125-inch replica inaugural medals for a few of the more recent presidents for $5.50 each, plus shipping and handling. The 3-inch versions are priced at $42.

According the Mint’s online catalog (http://catalog.usmint.gov), the Kennedy replica medal is not available for separate sale at this time, but can be purchased as part of a 10-medal set for $55.

There seems to be very little premium for these in the secondary market, with pieces reselling for less than the Mint’s price for newly struck pieces. One example of the 1.3125-inch Kennedy Inaugural replica medal recently sold for $0.99 on eBay; another sold for $3.99. The 3-inch medal was bringing prices of about $10 to $15 each on eBay.