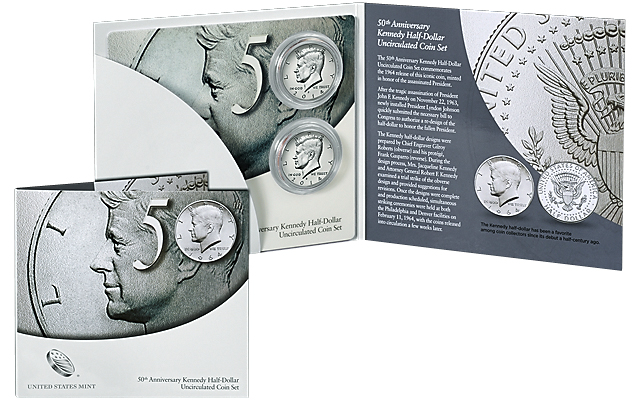 Orders for the two-coin 2014 50th Anniversary Kennedy Half Dollr Uncirculated Coin Set will be restricted to five per household when they go on sale at noon Eastern Time July 24.

All purchases for the three 2014 Kennedy half dollar 50th Anniversary products will be restricted to household limits of five of each ordering option per order, U.S. Mint officials said July 1.

The bureau will re-evaluate the order limit as necessary over the period the products are available for sale. Mint officials have not disclosed a closing date for sales to end.

The coins are encapsulated and mounted on a card, which is housed in a folder that allows viewing of both sides of the coins.

At noon Eastern Time Aug. 5, the U.S. Mint will offer the .9999 fine, 0.75-ounce gold, dual-dated 50th Anniversary Proof 1964-2014-W Kennedy half dollar struck at the West Point Mint. Pricing will be announced closer to the release date, since pricing is tied to the market by the Mint’s pricing grid for coins containing precious metals.

Both the two-coin Uncirculated set and gold Proof coin will be offered at 11 a.m. Central Time, noon ET, at the American Numismatic Association World’s Fair of Money in Rosemont, Ill.

To be offered sometime this fall will be the 2014 50th Anniversary Kennedy Half Dollar Silver Coin Collection for $99.95.

The encapsulated coins will be secured in coin wells within an embossed leatherette-type folder that includes the same image of John F. Kennedy that appears on the coins in this set, with patriotic imagery of stars and stripes.

The removable capsules allow visibility of both sides of the coins, which are housed in packaging that can be displayed as a trifold, or stored and protected by an outer sleeve.

The obverse of all seven coins bears Chief U.S. Mint Engraver Gilroy Roberts’ original 1963 sculpt adapted for the half dollar released in 1964. Roberts based this profile on a portrait prepared for Kennedy’s presidential medal. Roberts created his original 1964 design shortly after Kennedy’s assassination on Nov. 22, 1963.

Orders will be accepted at the Mint's website, and by telephone at 800-872-6468, while hearing- and speech-impaired customers with TTY equipment may order at 888-321-6468. A fee of $4.95 will be added to all domestic orders for shipping and handling.