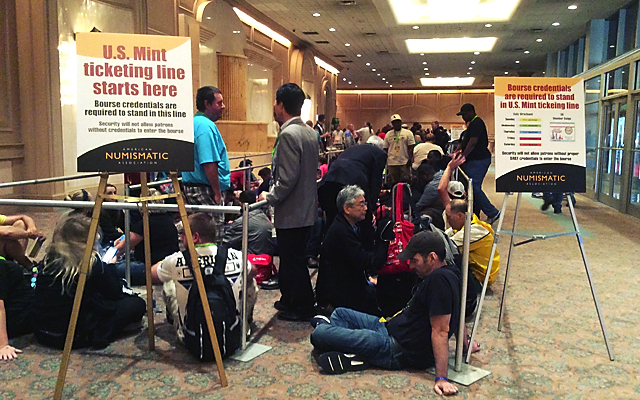 The U.S. Mint's in-person sales of gold Proof Kennedy half dollars at the August World's Fair of Money resulted in long lines at the Donald E. Stephens Convention Center in Rosemont, Ill.

The United States Mint will not “three-peat” during the fall Whitman Baltimore Expo.

It does not plan to sell the four-coin set of Kennedy silver half dollars at the convention, even though the expo, which runs from Oct. 30 to Nov. 2, begins just after the Oct. 28 launch of sales for the silver half dollar set.

When the Mint does begin sales of the set, the four-coin 2014 50th Anniversary Kennedy Half Dollar Silver Coin Collection, through its online and telephone order system, it plans to have 150,000 sets available for immediate delivery, U.S. Mint spokesman Mike White said Sept. 4.

The decision not to sell the four-coin set at the Baltimore show is a departure from recent history.

The Mint has launched sales at major coin shows in two high-profile coin programs twice in 2014, prompting widespread media coverage, strong sales for the Mint, quick profit-taking by some buyers, and criticism from various parties about disruptive crowds seeking to buy the coins.

The first program launch was at the spring Whitman Baltimore Expo, held March 27 to 30. The Mint began selling the 2014 Baseball Hall of Fame commemorative coins at the show, where long lines of buyers queued up for hours to buy the limited quantities of the gold $5 coins and silver dollars made available.

The second program launch was at the August American Numismatic Association World’s Fair of Money in Rosemont, Ill. Sales of the gold version of the 2014 Kennedy half dollar at that venue also attracted long lines of people, some of whom waited hours to buy the coins, made it difficult for others to attend convention activities.

The U.S. Mint ended sales at the ANA show two days early after an unruly crowd rushing to the entrance of the Denver Mint on Aug. 7 to buy the same gold half dollars, caused safety concerns for officials.

Experiences during the ANA convention led Mint officials to re-evaluate such program launches, so it may not be a surprise that officials decided against a sales offering at the fall Baltimore Expo.

“The United States Mint fully intends on evaluating its recent presence at the World’s Fair of Money and the launch of the John F. Kennedy Gold Proof Half-Dollar,” Tom Jurkowsky, director of the Mint Office of Corporate Communications, said Aug. 11. “Appropriate staff members will convene to discuss lessons learned and how best to proceed with similar coin launches in the future.”

Some in the collecting community were critical of the sales of the coins at the March and August coin shows, though the most criticism was directed at the sales of the gold half dollar in August.

Mint officials limited the number of Baseball Hall of Fame coins and gold Kennedy half dollars that could be purchased in a single transaction at each show. However, dealers circumvented the restrictions by either hiring surrogates to stand in line to buy coins or by offering purchasers fast profits.

When the 2014 50th Anniversary Kennedy Half Dollar Silver Coin Collection goes on sale, it will be through the Mint’s traditional venues, where it will be offered at $99.95.

Visit the U.S. Mint website for details on ordering the Kennedy set when it goes on sale.