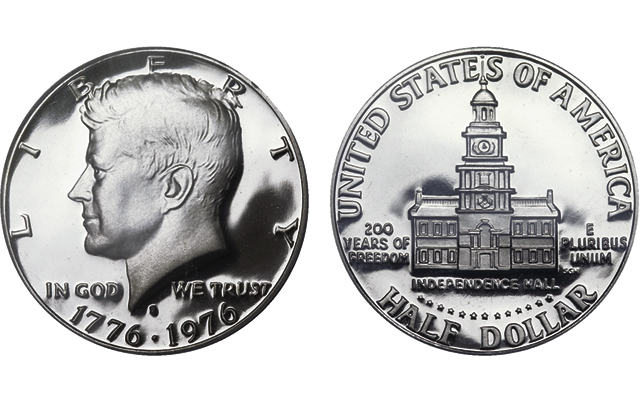 Just two design types are known for the Kennedy half dollar: the original reverse, based on the Presidential Seal, and the Bicentennial reverse, used in 1975 and 1976 on dual-dated 1776–1976 coins. 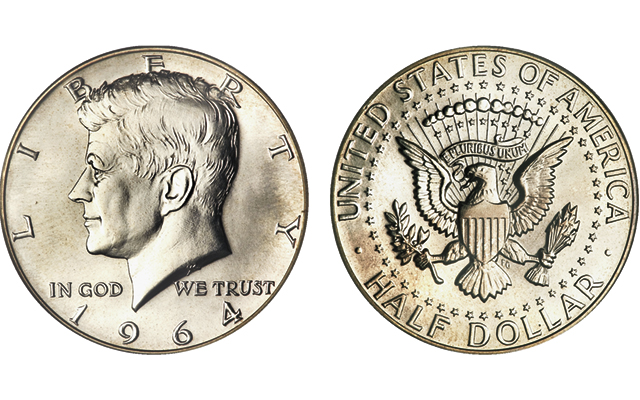 This 1964 Kennedy half dollar is one of the mysterious pieces with a finish similar to those used on the Special Mint set coins of 1965 to 1967.

Collecting Kennedy half dollars can be challenging. The series compromises more than 125 date-and-Mint-mark combinations, three metals, more than a half dozen finishes, two reverse design types and two subtypes. It also has one outstanding but little-known rarity.

The Kennedy half dollar was initially produced in 90 percent silver. In the face of rising silver prices, the Mint switched to 40 percent silver (silver-copper clad) coins in 1965. Those were abandoned in 1971 for the current copper-nickel clad pieces.

Over the decades, the coins have been struck in a half dozen or so finishes (depending on who’s counting) — circulation, Proof, Satin (2005 to 2010 Uncirculated Mint sets), Matte (Special Mint sets), another kind of Matte (1998-S coins produced as part of a commemorative Robert F. Kennedy package) and, for the 50th anniversary, Reverse Proof and Enhanced Uncirculated.

Aside from minor modifications and changes resulting from lowering the relief, in 50 years of production, the coin has had only one design change, and then only for one year. Coins dated 1976, produced to commemorate the nation’s Bicentennial, have Independence Hall on the reverse instead of the presidential seal.

Interestingly, there are only two significant subtypes — the first Proof coins struck in 1964 had heavily accented hair (struck from dies bearing the hair style that Mrs. Kennedy asked to be changed). The hair was toned down after about 100,000 coins had been struck. Both types are readily available, though Accented-Hair pieces are scarcer. Coin Values lists Proof 65 Accented-Hair coins at $50 and regular hair pieces at $18.

The rarest Kennedy half dollar is the enigmatic 1964 Special Mint Set half. The no-Mint mark coin, unrecorded in Mint records, is known by perhaps a dozen surviving specimens, though some estimates range as high as 50.

The nation’s Mints were working flat out in 1964, trying to make headway against a persistent coin shortage that was widely blamed on coin collecting. Adding to the Mint’s misery was the 1963 rise in the price of silver above $1.29 an ounce, making dimes on up worth more as metal than as money.

In 1965, the Mint replaced Proof sets with a less labor-intensive product, Special Mint sets. Special Mint set coins were carefully produced circulation strikes that exhibited a Matte Finish. Initially despised by collectors as poor man’s Proofs, they have come to be regarded as a distinct entity unto themselves.

The 1964 coins were possibly produced as trial strikes for the 1965 to 1967 Special Mint set run; some, however, believe they were produced as presentation pieces to mark the end of 90 percent silver coins.

The rarest Kennedy half dollar accounted for in Mint records is the Matte Finish 1998-S silver version, with a mintage estimated at 64,141 (the number of sets sold). The coin was packaged with an Uncirculated Robert F. Kennedy commemorative silver dollar in a “Kennedy Collectors set ” that sold for $59.95.

In 50 years of production, the Kennedy half dollar has never seen much circulation. The 1964 90 percent silver and 1965 to 1970 40 percent silver coins were pretty much hoarded for their metallic content.

By 1971, when the coin was first produced in copper-nickel clad, the denomination had fallen out of favor. Most people preferred to carry quarter dollars than heavy halves. Since 2002, the coin has been minted solely for sale to collectors.

In MS-65 and below, most Kennedy half dollars are common and inexpensive, retailing for just a few dollars each. At MS-66, though, prices jump markedly, especially for the 40 percent silver-copper clad halves of 1965 to 1970, which run about $200 each.

For 2014, the Mint is issuing special gold, 90 percent silver and copper-nickel clad half dollars marking the coin’s 50th anniversary. The portrait on these coins will replicate the original designs from the 1964 sculpt. Over the decades, the designs have been modified, especially through repeated reductions in relief.

The silver and copper-nickel clad versions will bear the date 2014. The gold coin will bear the double date 1964-2014 and have a W for West Point Mint mark on the reverse, the same position that was used in 1964 for Mint marked coins.