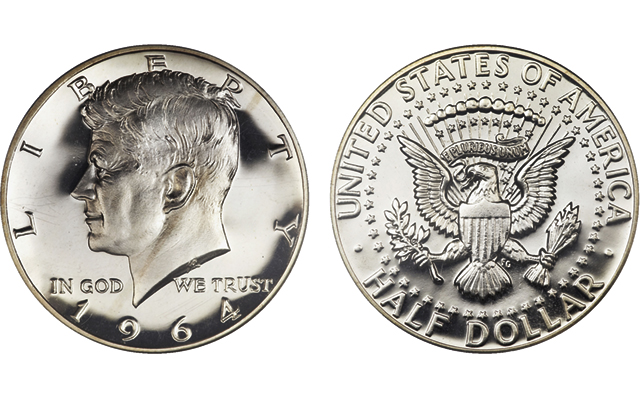 The 1964 release of the Kennedy half dollar—pictured here is a Proof 1964 Accented Hair example—came at a time when the numismatic hobby was hot.

Coin collecting was a hot hobby in 1964, fueled by new designs on circulating coins, rising silver prices and the prospect of finding valuable coins in change.

The next year, the entire nation was checking change as reports started circulating that the Mint had released a valuable variety of 1960 cent. Daily newspapers ran articles detailing the differences between Small Date and Large Date cents and speculating that the scarcer Philadelphia Mint Small Date cents were worth as much as $20 apiece.

Coin magazines were filled with stories of circulation finds, including a September report that a New Orleans drug store had received three bags — 15,000 coins worth as much as $300,000 — of the scarce cents.

The change-checking frenzy occurred amid a background of rising silver prices. On Sept. 9, 1963, the metal crossed the $1.29-an-ounce mark, the point at which circulating silver coins were worth more as metal than as money.

Collectors and speculators besieged Treasury offices, exchanging silver certificates for silver dollars. Dollars, some dating back as far as 1850, poured out of government vaults. It was front-page news across the country when the Treasury Department pulled the plug on the dollar deluge on March 25, 1964, the day after the Kennedy half dollar was released.

Kennedy half dollars, though, continued to enjoy popularity, partly because they were 90 percent silver and partly because of the enormous demand from non-collectors for these mementoes of the assassinated president.