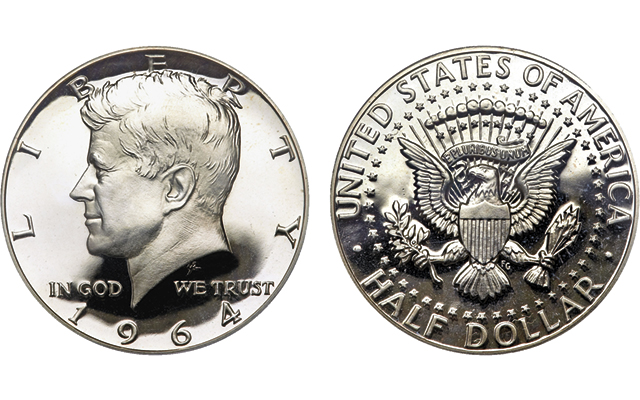 The United States Mint struck Kennedy half dollars in 90 percent silver for just one year, 1964, before the adoption of a silver-copper clad composition that had a 40 percent silver content. Shown is a Proof 69 Deep Cameo example that represents the highest quality for the date.

That’s a question many senior collectors can readily answer — even though they were but children then. Coin collecting was a popular hobby in 1964. The possibility of finding treasure in change attracted millions in the early 1960s, many of them kids flush with cash from paper routes and after-school jobs.

In Hackettstown, N.J., my local bank — like many across the country — restricted distribution to two or three coins per person. I stood in line to get my allotment and then enlisted friends to get more. By the time the bank closed for the day I had amassed a roll. I kept the coins through high school, college and young adulthood, but sold them during the silver boom of 1979 to 1980, when silver spiked to $50 an ounce.

Texas collector Connie Murphy recalls getting her first Kennedy half dollar. “My husband and I were living in a San Francisco (Bay Area), Calif. apartment waiting to be approved for our first home. And, as the only collector in my home, I bought my first two silver Kennedy half dollars, knowing full well that every dollar spent in those days would be eating into our down payment.

“But to my way of thinking, and considering the tremendous inflation we face today, it was an excellent investment. We were only 23 when we moved into our first home.

“By the way, I still have these halves.”

Ohio collector Mike Gunner recalled: “I was 16 years old living in Toledo, Ohio, at the time. I had all of my family go to the bank to get whatever they could get for me. I had been collecting for seven years as of that time.”

He said, “I was a member of the Glass Center Coin Club in Toledo and I can remember members trading their duplicates for other desirable items.”

Herman Blanton, Mount Vernon, Ohio, collector and researcher, recalls getting his first Kennedy half at a family gathering as a 12-year-old.

He said he had blue Whitman folders for Lincoln cents and Jefferson and Indian Head 5-cent pieces. “On an allowance of 25 cents a week, there wasn’t budget for collecting silver coins,” he said.

“With the excitement of the Kennedy half dollar everyone was wanting one, not only collectors. I did get one by surprise when a number of families were gathered. One of the men pulled two Kennedys from his pocket and offered me one, after which my father paid him the 50 cents.”

Some banks initially restricted the coins to their best customers, a fact that did not sit well with one teller in Cleveland, Ohio.

Retired Cleveland Plain Dealer sports writer Dan Coughlin recounted the brief banking career of the late sports announcer Bob Buck in his 2010 book, Crazy, With the Papers to Prove It. Coughlin wrote, “Next came a job as a bank teller at the Cleveland Trust (now part of KeyBank) … It lasted only three weeks.”

Buck told Coughlin, “When we got our first shipments of Kennedy half dollars the manager told us not to give them to anybody unless they had $65,000 in their savings account. Late that afternoon a little old lady came in. Every week she took a bus to the bank to deposit one dollar. She asked me if we had any Kennedy half dollars. ‘Sure,’ I said. ‘Here’s two of them.’ ?The branch manager was standing behind me. He started bellowing, berating me in front of everybody, so I picked up my money box and threw it all over the bank. Then I got my coat and walked out.”