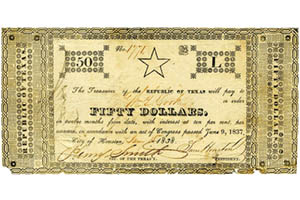 This Republic of Texas note, commonly known as "Star Money" for its design, was issued from the city of Houston from 1837 to 1838. A complete set of "Star Money" is one of several themes in the exhibit.

June 22 is the last day for visitors to explore the exhibit, “On the Run: Currency, Credit and Capitals of the Republic of Texas,” on display at the Texas Capitol Visitors Center in Austin.

More than 43,000 visitors in February, March, and April have already gotten a “taste” of Texas numismatics with a side of history. That includes 23,764 students on guided tours, according to Kyle Schlafer, program supervisor for the Texas Capitol Visitors Center.

The exhibit focuses on the financial history of Texas when it was an independent nation.

The Austin exhibit “is almost entirely numismatic, and brings this unique theme deep into the heart of Texas,” Bevill said. “It is part of my long term efforts to bring the study of history through numismatics out into the mainstream.”

Bevill said the exhibit was “brought together by a handful of private collectors and with loans of material from the John N. Rowe III Collection of Texas Currency at the DeGolyer Library at Southern Methodist University, the University of Houston — Special Collections Library and the American Numismatic Association.”

Those who want a preview of the exhibit or who will not be in Texas to see the exhibit in person may take an online tour at www.tspb.state.tx.us/CVC/exhibits/new.html.

The Texas Capitol Visitors Center is located on the southeast corner of the Capitol Grounds and is housed in the General Land Office Building, which was completed in 1857.