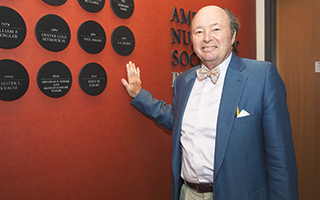 John W. Adams will be presented with the 2014 Archer M. Huntington Award by the American Numismatic Society for excellence in numismatic scholarship on April 26.

Adams will be presented with the award on April 26 at the Massachusetts Historical Society in Boston. The event will include his presentation of the Silvia Mani Hurter Memorial Lecture, titled "A Recidivist Collector," and will be followed by a reception in his honor.

Adams research in the field of numismatics focuses on American and European medals, numismatic literature, and large cents. In his early research, his approach is largely bibliographical. His Monographs on Varieties of United States Large Cents, 1793–1794, published in 1976, provides a concise introduction to the various key publications in this field, notes the ANS.

His two volumes of United States Numismatic Literature (1982, 1990) are among the most useful bibliographical aids on American numismatic auction catalogs available, according to the ANS, which notes that, in particular, Adams erudite introductions to the various collectors are widely quoted.

In the last 15 years, Adams has focused primarily on medals. His book The Indian Peace Medals of George III, or, His Majestys Sometime Allies, published in 1999, demonstrates his breadth of knowledge, according to the ANS, which adds that "through careful numismatic analysis Adams was able to expand our knowledge in this series."

In 2010 Adams wrote Medallic Portraits of Admiral Vernon: Medals Sometimes Lie with Fernando Chao and in collaboration with Anne Bentley. This work provides a study of the many varieties of the Vernon series, which often differ only in tiny details, provides historical context, offering a concordance with the many prior studies and much more.

"What distinguishes John Adams from other writers is his passion for history, a beautiful, academically correct writing style, and diligence in seeking out overlooked historical and numismatic sources," said Dr. Jere Bacharach, chairman of the ANS Huntington Committee.

Adams has served as a Trustee of the Massachusetts Historical Society, where he was instrumental in conserving its coin cabinet, and as president of the Numismatic Bibliomania Society and the Medal Collectors of America.