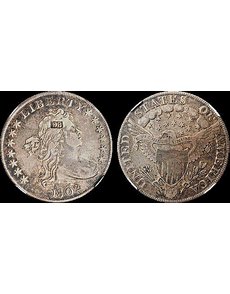 The various auctions of the John J. Ford Jr. Collection have included many fascinating pieces like this 1802 Draped Bust dollar impressed with the mark of Providence, R.I., silversmith Ezekial Burr, which brought $5,288.

The bounty of the varied collections of John J. Ford Jr. continue to add a fresh blend of esoteric material to the rare coin market.

Since offering the first 335-lot sale on Oct. 14, 2003, the auctions have brought a huge volume of rarely seen material to the market, and the prices, generally, have been strong to very strong.

Leading the session at $52,875 was an R.W. Owen Ropery token, a rare Canadian token called “The King of Pre-Confederation tokens” in the lot description and graded choice Mint State by the firm. Like many of the Ford items, it has a well-documented provenance. It was sold in 1927 as part of Wayte Raymond’s sale of the W.W.C. Wilson Collection where it was called “the Baron Ferrari specimen,” and it was included in a 1922 Sotheby’s auction.

While the total number available today is unknown, examples in all grades are expensive. Another example graded Fine 12 brought $18,000 Canadian at a July 2009 auction by Geoffrey Bell Auctions.

More familiar to U.S. collectors was an 1820 North West Company token that is listed in A Guide Book of United States Coins. The reverse depicts a charming beaver and, as nearly all known examples are, it was holed for suspension at 12 o’clock.

The choice Very Fine piece was described as having crossover interest to American and Canadian collectors, offering “a supreme combination of provenance, sharpness, eye appeal, and rarity.” It brought $21,150 and carries a rich ownership history that goes back to 1923.

Another coin in the Aug. 14 auction with crossover appeal was one of several regular issue coins with impressed countermarks on them: an 1802 Draped Bust dollar with the mark of Ezekial Burr on the obverse. Collectors are perhaps best familiar with the EB mark used by Ephraim Brasher on his gold doubloons, but this “EB” was born in Providence, R.I., in 1765. Burr eventually left the silversmith trade and became a grocer.