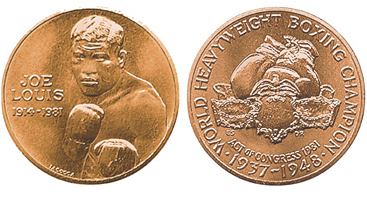 Boxing legend Joe Louis received a congressional gold medal, a series that is the cover topic of the June monthly issue of Coin World.

Our friend Michael Baadke, a senior editor at Linn's Stamp News, wrote about boxing legend Joe Louis today, as May 13 is his birthday.

Louis was a recipient of a congressional gold medal (presented posthumously in 1982). That series of medals is the focus of the cover story of our June monthly issue, which will be out next week.

Boxing champion Joe Louis was born Joe Louis Barrow on May 13, 1914, in Lafayette, Ala. At age 10 he moved to Detroit with his family and developed his interest in boxing.

As a light heavyweight, Louis won the Golden Gloves novice division championship in 1933 and became a professional in 1934, knocking out Jack Kracken in the first round of his first professional match.

In 1937, Louis became the world heavyweight boxing champion by knocking out James J. Braddock in the eighth round of their match.

Louis joined the U.S. Army as a private in 1942, participating in exhibition matches and promoting enlistment.

He reigned as world heavyweight boxing champion from 1937 to 1949, successfully defending his title 25 times before retiring. He returned to the ring in 1950, retiring permanently the following year.

Louis died on April 12, 1981, and was awarded the Congressional Gold Medal the following year. In 1990 he was inducted into the International Boxing Hall of Fame.

Louis was posthumously awarded the Congressional Gold Medal in 1982, in recognition of his "accomplishments which did so much to bolster the spirit of the American people during one of the most crucial times in American history and which have endured throughout the years as a symbol of strength for the Nation.”

Kitco.com listed the following prices per ounce as of 4:11 p.m. ET Wednesday: