John F. Kennedy half dollars now a part of our nation’s history 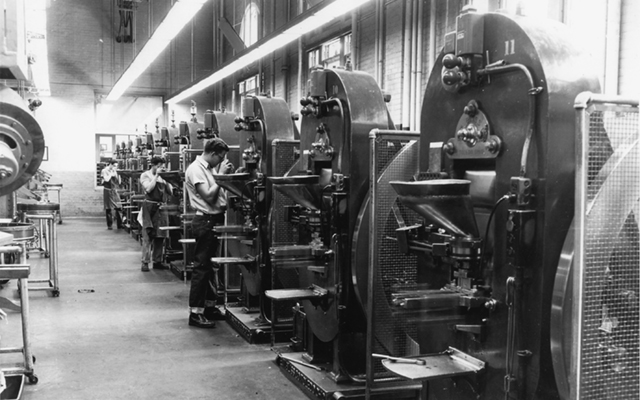 The east side of the Main Press Room at the Denver Mint in late 1963. Pictured from the front is Pressman Norman Walso, die setter Leo Madrid and the author.

On Nov. 22, 1963, I was a pressman at the U.S. Mint, Denver, Colo., working the 7-to-3 shift. The phone rang after lunch and Hjlmar Persman, press room general foreman, answered the phone. He waved at me to come over and take the call. He gave me that “look,” which meant no personal calls on the Mint phones.

The caller was my wife, who said that she had just heard on TV that the president had been shot in Dallas, Texas. I was in shock. Someone had shot the president. Unbelievable.

I told Hjlmar and he took off down the hall to the Mint police control room where they had a police band radio.

He came back in a few minutes and told me — and everyone else in the Press Room — that President Kennedy had been shot by an assassin and died. The Denver Mint was now on a lock down.

As the word spread, a strange silence came over the production areas. It was like the life had been sucked out of the building. Work went on but in a different way, almost like everyone was in a daze.

The funeral service were scheduled for the next Monday, Nov. 25, 1963. The majority of federal agencies were going to be closed for the funeral. The only ones scheduled to work were those involved with national security and those considered essential. The Mint was considered critical to the country due to the ongoing national coin shortage.

Shortly after President Kennedy’s death, Congress passed a bill authorizing a new design for the half dollar honoring him. In less than six weeks we were making these half dollars at the Mint.

Early in January 1964, the Denver Mint had a first-strike ceremony for the new Kennedy half dollar. All of the presses were shut down. The cameras rolled as Hjlmar stamped the first Kennedy half dollars for the media. When everything was done he yelled out to the rest of us, “Wind them up!” The coin presses started running, and Kennedy halves were officially in production.

I still have both of them.

The Kennedy half dollars had become part of our nation’s history.