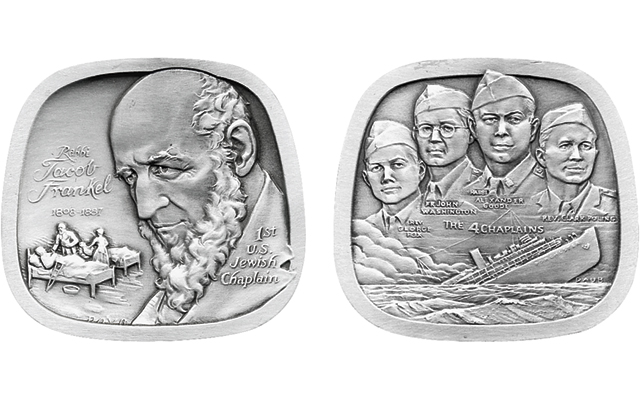 The 2014 Jewish-American Hall of Fame medal honors five individuals who made history serving the U.S. military. Rabbi Jacob Frankel, the first Jewish chaplain in the United States during the Civil War, is on the obverse, while the “Four Chaplains” of World War II fame appear on the reverse. The silver version is shown here.

The Jewish-American Hall of Fame produces the longest continuing series of art medals in America, launched in 1969.

The medals feature Rabbi Jacob Frankel, the first Jewish U.S. chaplain, shown on the obverse of the medal, and the “Four Chaplains” or “Immortal Chaplains” on the reverse.

The medal is designed by Eugene Daub, who has designed seven of the last eight medals in this long-running series.

Up until the outbreak of the Civil War, Jews could not serve as chaplains in the U.S. armed forces, although Jewish soldiers served. In 1862, Congress voted to allow Jewish chaplains, and not long after, the Board of Ministers of the Hebrew Congregations of Philadelphia requested a Jewish hospital chaplain.

Frankel, known as the “sweet singer of Israel,” was nominated and President Lincoln signed his commission on Sept. 18, 1862. For three years, he acted as an Army chaplain, singing, chanting, and praying with soldiers.

Many stories of bravery among the American military during World War II are known, but few have captured the imagination and admiration of Americans more than the Four Chaplains, the name given to Rabbi Alexander Goode; John Washington, a Catholic priest; Clark Poling, a Dutch Reformed minister; and George Fox, a Methodist minister.

These men served and died on the USAT Dorchester, which was torpedoed by a German submarine off the coast of Newfoundland, Canada, in the Atlantic Ocean, in the early morning hours of Feb. 3, 1943. The ship’s electricity went out and panic ensued. The chaplains sought to calm the men and organized an orderly evacuation of the ship.

When the supply of life jackets being passed out was depleted, the chaplains removed their own life jackets and gave them to others. They linked arms and, saying prayers and singing hymns, went down with the ship.

The medals were released on July 4, according to Mel Wacks, who has organized the program since its beginning.

The bronze medals are available for $45, the silver medals are offered for $200 and the gold-plated medals are priced at $250.

Wacks is offering a 20 percent discount for Coin World readers who identify themselves as such.