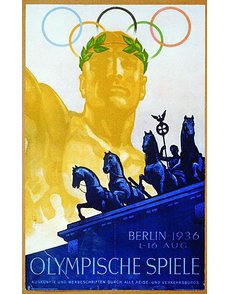 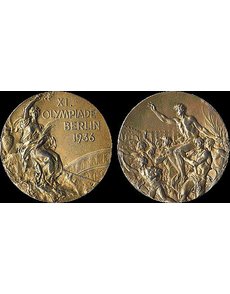 A 1936 gold Olympic medal, one of four earned by American athlete Jesse Owens in Berlin, is being sold in an online auction closing Dec. 7. 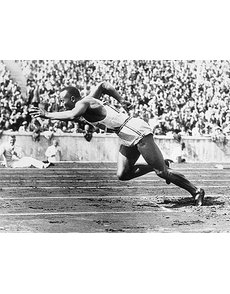 A 1936 Olympic gold medal earned by Jesse Owens — a symbol of Owens’ record-breaking performance in Berlin in defiance of German dictator Adolf Hitler — is being offered at auction.

The medal is the only original Owens gold medal in existence, but cannot be traced to the specific event for which it was awarded. Owens earned four gold medals at the Games, for winning the 100-meter race, the 200-meter race and the long jump, and as part of the 4x100-meter relay team.

The medal in the auction has reportedly been in the estate of entertainer Bill “Bojangles” Robinson’s late widow Elaine Plaines-Robinson. Owens gave Bill Robinson the medal because he helped Owens find work in entertainment following Owens’ Olympic exploits, as documented in the biography Mr. Bojangles by N.R. Mitgang.

The other three medals were lost, and Owens was issued a replacement set that was featured as part of the 1976 Freedom Train exhibit. The replacements are now on exhibit at Owens’ alma mater, Ohio Sate University, as part of their Jesse Owens exhibit.

David Kohler is president of SCP Auctions Inc., in Laguna Niguel, Calif., the firm handling the sale. The sale begins Nov. 20 and ends Dec. 7, at www.SCPAuctions.com.

“This goes beyond world history ... this belongs in a museum like the Smithsonian Institution. And maybe the buyer will place it on loan,” Kohler said.

Owens became a symbol of triumph in the face of dictator Adolf Hitler’s flexing of the perceived might of the Aryan race and Nazi Germany for propagandistic purposes.

Owens was born Sept. 19, 1913, in Oakville, Ala. He and his family then moved to Ohio, where he found success in high school in Cleveland and at college at OSU. Owens won a record eight NCAA individual championships, four each in 1935 and 1936, before fulfilling his Olympic ambitions in the summer of 1936 on the verge of a larger geopolitical maelstrom.

After Owens won the 100-meter event, a furious Hitler stormed out of the stadium, though some reports indicate that Hitler later congratulated the athlete on his success.

The surviving medal is “one of the world’s most poignant symbols of triumph,” according to SCP Auctions.

Ingrid O’Neil, of the Corona Del Mar, Calif., sports and Olympic memorabilia firm bearing her name, said 1936 Berlin gold medals come up at auction occasionally, but cannot usually be traced to a recipient because, prior to 1960, recipients’ names were not engraved on the edge as they have been since that time.

O’Neil said she has been offered 1936 gold medals purported to be among the missing Owens medals on multiple occasions, but those pieces lacked documentation.

She said that she knows an overseas bidder as well as a bidder inside the United States who will be bidding on the medal being offered by SCP Auctions.

The lot also includes letters of authenticity from experts in Olympic souvenirs and statements of provenance from the Robinson family, as well as other evidence related to the medal’s ownership history.

The auction house has established a minimum bid of $50,000, and expects the medal to sell for upwards of $1 million.

Several other Olympic medals from other consignors are included in the auction.

For more information about the auction, telephone the firm toll free at 800-350-2273 or visit its website. ¦