Readers Ask: What is behind the high value? 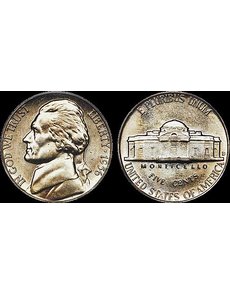 A 1956-D Jefferson 5-cent coin with full steps (this piece is graded Mint State 66 full steps by Professional Coin Grading Service) can bring prices that are astronomically higher than coins in the same grading but lacking full steps.

As a newer collector, I have a question that I hope someone can answer. Why are some Jefferson 5-cent coins worth so much more in Mint State 66 full steps than in regular MS-66? For example, Coin World’s Coin Values lists a 1956-D 5-cent coin graded MS-66 at $45 with an MS-66FS example at $3,500. Is this a misprint? Is the decimal point in the wrong place?

The term “full steps” is a designation that is used when the steps of Monticello are fully defined.

Professional Coin Grading Service defines “full steps” (abbreviated typically as “FS”) as occurring on Jefferson 5-cent coins grading on MS-60 or finer. Specifically, “at least five complete steps must appear on Monticello. Any steps that join or fuse together, whether created that way or subsequently damaged, cannot be considered for the Full Steps designation.”

In 2004, Numismatic Guaranty Corp. began designating two full steps categories: 5FS for five full steps and 6FS for six full steps. In a Feb. 1, 2004, press release the firm noted, “Since NGC’s standard hitherto has been to label as FS only those coins having six complete steps, any NGC-certified Jefferson Nickel already carrying the FS designation may be considered to have six full steps.”

A 1956-D Jefferson 5-cent piece is generally a common coin with a mintage of more than 67 million pieces. Examples occasionally surface in pocket change.