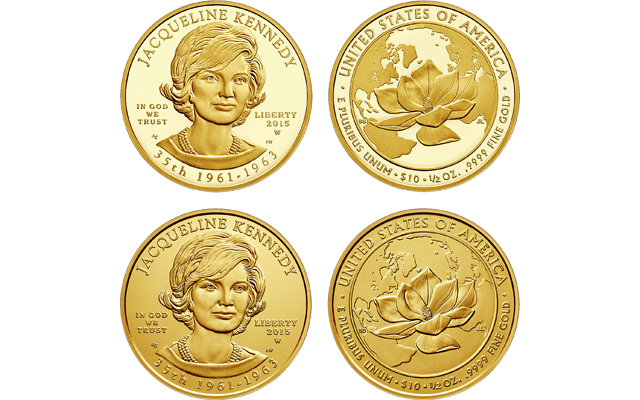 Proof and Uncirculated versions of the 2015-W Jacqueline Kennedy First Spouse $10 gold coins will be offered for sale from the U.S. Mint beginning at noon Eastern Time June 25.

The issue is limited to a maximum combined authorization of 30,000 Proof and Uncirculated coins. Customer orders will dictate how the mintage will be divided.

The reverse features the saucer magnolia, which Mrs. Kennedy chose to be planted both in the White House garden and near the eternal flame at the grave of her husband, President John F. Kennedy, at Arlington National Cemetery. The petals in the design span a globe, their tips connecting to locations of some of her most notable diplomatic visits.

Pricing for the half-ounce, .9999 fine gold coins, subject to change weekly, is based upon the U.S. Mint's pricing grid for coins containing precious metals. Pricing for the Jacqueline Kennedy First Spouse gold coins will be announced close to the on-sale date.

Both the Proof and Uncirculated gold coins are struck at the West Point Mint.

The same designs sans coin inscriptions will appear on 1.3125-inch bronze medals that the U.S. Mint will offer individually and as part of several numismatic sets.

The bronze medals are struck at the Philadelphia Mint, but do not bear the facility's P Mint mark.