Isolated incuse letter on 2001-D 1c probably not a Mint 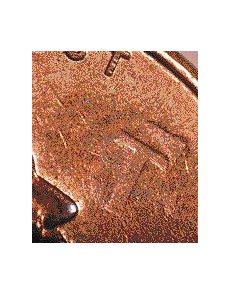 An isolated incuse T sits in the field to the right of Lincoln’s face on this 2001-D Lincoln cent. 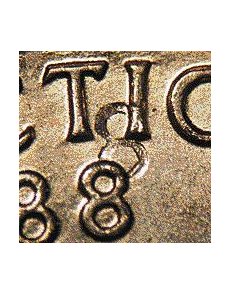 A dropped number 8 partly overlaps its raised counterpart in this 1999-D Connecticut quarter dollar. Some black die fill is retained in the upper loop of the 8. 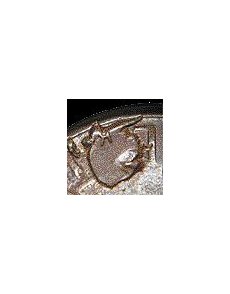 The reverse face of this 1973-D Lincoln cent displays a brockage from a struck fragment. The R of TRUST and Lincoln’s forelock occupy a larger recess. 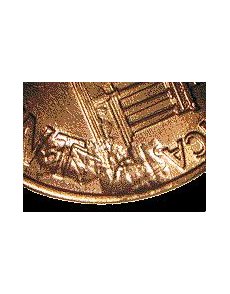 A normally oriented incuse N (from ONE) was left on the reverse face of this 1960-D Lincoln cent by a thin struck fragment. 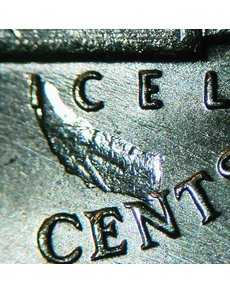 An incuse V (from FIVE) sits in the middle of a coarsely textured, sickle-shaped depression on the reverse face of a 1945-P Jefferson 5-cent coin. It is most likely the impression of a lamination flake that spalled off the surface of another 5-cent coin.

Isolated incuse design elements arise from many causes, both inside and outside the Mint. A 2001-D Lincoln cent sent to me by Gerald Lykins shows an incuse T (from CENT) in the field to the right of Lincoln’s face. Lykins wanted to know whether it was a Mint error or some form of post-strike damage.

The first order of business was to list the various candidates.

(1) Dropped letter: A hardened plug of compacted dirt and lubricant (“die fill”) falls out of a letter-shaped die recess and onto a planchet. The letter-shaped plug is driven into the planchet, leaving an incuse impression (see photo). The impression is normally oriented (i.e., facing the same way as a normal letter) unless the plug flips over (see Collectors’ Clearinghouse, April 19 and Aug. 16, 2010).

(2) Brockage from a struck fragment: Stray bits of metal occasionally find their way between the dies and are struck on one or both faces. If struck into the next planchet, it leaves an incuse, mirror-image version of whatever design was present on the fragment (see photo).

(3) Impression of thin metal layer with uniface strike: If a thin piece of metal is trapped between a die and a planchet, the strike will force the metal to mold itself to the die recess. If the fragment falls out and is struck into the next planchet, it leaves a normally oriented incuse impression, so long as it (1) doesn’t flip over, and (2) remains next to the same die (see photo and the Nov. 3, 2008, Collectors’ Clearinghouse).

(4) Detached lamination flake: A letter-bearing flake can spall off the surface of a coin and remain behind in the striking chamber. When it’s struck into a planchet, it leaves an incuse impression that can be either normally-oriented or mirror-image, depending on the two factors mentioned above (see photo and Feb. 7, 2005, Collectors’ Clearinghouse).

(5) Accidental contact mark. This can occur inside or outside the Mint as coins are forced against each other inside machinery.

(6) Intentional alteration. Letters are sometimes intentionally impressed into a coin, either as a form of mindless vandalism or to make a quick buck.

Since the T on Lykin’s cent is symmetrical around a vertical axis, there is no way to tell whether it’s normally oriented or mirror-image. It would also have been helpful if the letter had overlapped some of the design. Still, many useful clues remain that allow us to tease apart the various possibilities.

A shallow depression constituting the corner of a rectangle is located above and to the right of the T. The floor of the depression shows no texture. While dropped fillings can extend beyond the letter itself, the resulting shallow depression is irregular in outline and often shows a coarse texture.

The incuse T is clearly not a brockage from a struck fragment. The letter impression and the surrounding recess are both too shallow. The borders of the recess are too uniform and too incomplete. While a brockage of this type will usually be found on the face opposite its normal raised counterpart, it will also usually be aligned with it in vertical space. The incuse T is not aligned with the raised T of CENT.

A detached lamination flake from a struck coin is unlikely to leave a surrounding recess that is incomplete, rectangular in shape, and devoid of texture.

An incuse impression from a thin, struck fragment is unlikely for the same reasons. The outline of the letter also tends to be mushier and the letter is usually found on the same face as its raised counterpart (see photo).

The evidence indicates this is not a Mint error. That leaves either an accidental contact mark or an intentional alteration.

An accidental contact mark is unlikely. The field to the right of Lincoln’s face is recessed and sheltered — the last place an isolated contact mark would be expected. Light contact marks are generally restricted to the higher points of the design.

The preponderance of the evidence indicates that this isolated T represents an act of mischief. I believe that the perpetrator used a cutting disc attached to a Dremel-type rotary tool to cut out a small rectangular piece from a cent. The piece was then placed on the obverse field and squeezed against the Lykin’s cent in a vise or C-clamp.