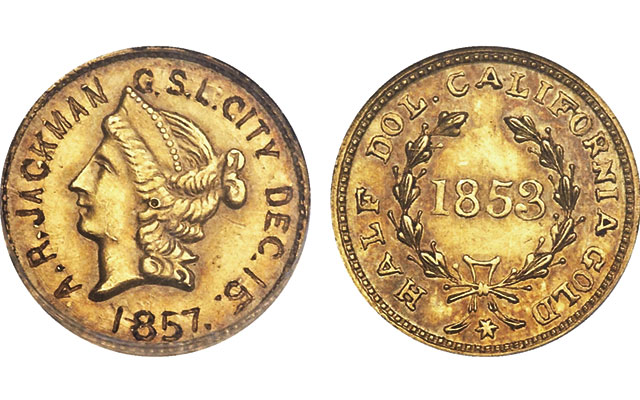 An unusual engraved California small-denomination pioneer gold piece may be the first numismatic object from Utah.

An unusual piece of California small-denomination pioneer gold is one of the highlights of Heritage Auctions’ Feb. 26, Feb. 27 and March 1 auction held in conjunction with the Professional Numismatists Guild’s Dallas Coin and Paper Money Show.

The round 50-cent piece, with design elements similar to the Coronet Liberty type used on contemporary Coronet gold dollars of the time, was privately issued.

It is especially unusual in that it was engraved for use as a presentation piece.

Heritage writes in its description: “Perhaps the earliest known numismatic piece of its kind from Utah, this engraved California gold half dollar is intriguing both for its known and unknown historic importance. The host coin is a BG-429 Small Head, Bust Close to First Star, Period One small denomination gold piece dated 1853, and engraved for presentation to A.R. Jackman, December 15, 1857.”

It is certified by Numismatic Conservation Services as genuine, but does not carry a grade.

The description provides the tantalizing story behind Jackman, writing, “Ammi Rumsey Jackman was one of the first Utah pioneers, arriving at the Great Salt Lake Valley on September 30, 1847. He was born in Genesee County, New York in 1825. He left New York at age 13 and worked for a time on the steamboats in Missouri, where his family converted to Mormonism in the 1830s and soon moved to Nauvoo, Illinois. He became a member of the Mormon Battalion that started West at the time of the exodus after the assassination of the Mormon leader and prophet, Joseph Smith. Jackman traveled with the second party of emigrants to Salt Lake.”

Heritage adds, “The exact engraving on this tiny gold piece is intricately done and reads “A.R. JACKMAN G.S.L. CITY DEC. 15. 1857.” The inscription encircles the obverse. The fact that this gold piece was presented just a few months after the infamous ‘Mountains Meadows Massacre’ near Cedar City, Utah in 1857 may or may not have any significance.”

It was previously offered at Ira & Larry Goldberg Auctioneers’ April 2008 sale as part of the Latter-Day Saints Collection where it sold for $2,400 against an estimate of $4,000 to $6,000. That lot description stated, “This California gold half dollar is perhaps the earliest known numismatic piece from Utah, and as such has great significance.”

The PNG show will be held at the Gaylord Texan Resort & Convention Center, located at 1501 Gaylord Trail, 7.5 miles from Dallas/Fort Worth International Airport.  The show will be open to the public for a fee of $10 or free with a coupon, available at www.pngdealers.org/images/COUPON.dls.pdf.