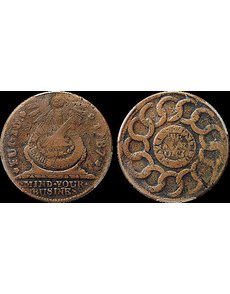 Isn’t the person who owns one 1787 Fugio copper just as much of a Colonial collector as the one who owns 50? Many collectors enjoy collecting varieties of the Fugio coppers, which were cataloged by Eric P. Newman in 1952.

The markets for some early American coin series are driven almost entirely by variety collectors. I mean not only die variety collection completists, but those who would really like to have a half dozen Connecticut coppers, or three or four New Jersey coppers. Those two series certainly lead this crowd, but the same could be said for Vermont coppers, or Machin’s Mills counterfeit halfpence, or even Saint Patrick “farthings,” which are popularly collected by die variety despite the fact that there isn’t even a published book on the series.

Why do these series hold so much appeal for those who like to collect multiple pieces, while other series like Massachusetts silver, Virginia halfpence, Fugio coppers or Massachusetts half cents are mostly purchased by the one-is-enough crowd?

I wish I knew the answer to this question. The three state copper issues that most appeal to variety collectors, namely those from Vermont, New Jersey and Connecticut, have a long history of variety collecting to propel them into the 21st century.

The first variety monographs on these series were published in 1870, 1881, and 1892, respectively. That these series are the ones most likely to be collected by variety is, perhaps, a by-product of tradition more than anything else.

By comparison to those used for these state copper series, other variety monographs are downright modern: the Hillyer Ryder text on Massachusetts coppers was published in 1920, the Sydney P. Noe monographs on Massachusetts silver didn’t come out until the 1940s, and Eric Newman’s work on Fugio coppers was published in 1952. The Saint Patrick series is still waiting for one.

With some series, obvious issues are attached to collecting by variety. Buying duplicate Massachusetts silver coins is clearly a pricey proposition, for instance. Maybe if they cost what New Jersey coppers cost they would be pursued as avidly. Virginia halfpence have never had an easy-to-use variety guide, and their main designs are hubbed, thus limiting variation from die to die. Then again, people collect Morgan dollars by die variety, so perhaps hubbing isn’t the limiting factor.

Wouldn’t it be interesting to see what percentage of people who own Pine Tree shillings own more than one? Or how many collectors who own a Pine Tree shilling also own the similar-but-different sixpence and threepence denominations? Or what the average number of New Jersey coppers in a collection is?

Isn’t the person who owns one Fugio copper just as much of a Colonial collector as the one who owns 50?