Is it finest or worst known? 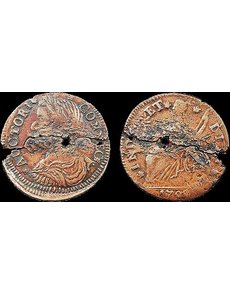 This rare 1788 Connecticut Copper is either the finest or worst known, depending on how you assess its faults against its merits. It was given a grade of About Uncirculated 50 by the auction firm and realized $1,175.

Some coins are considered beautiful by nearly everyone, from the noncollector to the most avid numismatist. Then there are others that present a look that may be more of an acquired taste.

Stack’s Bowers Galleries’ January 2013 Americana Sale contained a coin that perhaps only the most devoted specialist could love.

It was a 1788 Connecticut Copper, with Draped Bust Left design on the obverse, and a seated figure on the reverse, mimicking the Britannia featured on contemporary English coins.

Early Colonial coins were produced from handmade dies, and the variances in their production are among the things collectors enjoy most about the coins of the era.

The subject coin was struck on a cracked and badly broken planchet, described in the catalog as “little more than scrap, with a horizontal striation across the center so severe that it is a wonder the coin remains intact.” It even has several “natural holes” along with some old inactive corrosion.

Despite its flaws, the coin also has its charms.

The surfaces are described as “attractive mahogany brown,” the centering is described as good, and the legends and date are both present. The description adds that it is, “Really a remarkable piece, either the finest known or the worst known, depending upon your perspective.”

The cataloger’s concluding sentence fully encapsulated the sometimes elusive charm of early, hand-struck coins: “A truly fascinating Connecticut, one which will either be proof of the new owner’s dedication to the series or his absolute madness, or perhaps both.”

If a curious buyer had any doubts of the coin’s quality, perhaps the provenance would pique one’s interest. It had been purchased by Ted L. Craige, from F.W. of New Rochelle, N.Y., on Feb. 2, 1964, “the same week the Beatles landed nearby at JFK Airport.”

A Very Fine 20 example of the same variety described as “more typical” than the aforementioned one realized $258. Its planchet was described as “stout” while the surfaces were described as “Glossy and attractive dark chocolate brown.” ¦