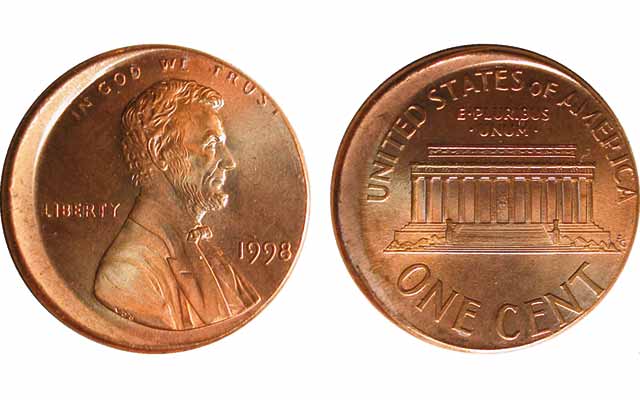 This minimally expanded 1998 Lincoln cent is considered a minor off-center strike because the letters ST are cut off on the obverse face. 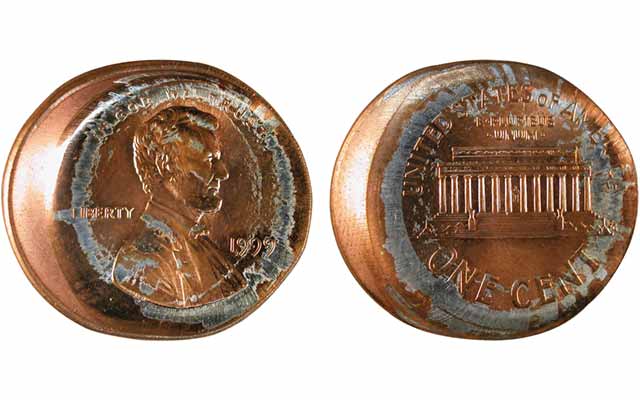 Although it protruded much farther outside the striking chamber, this greatly expanded 1999 Lincoln cent is considered an uncentered broadstrike because all of the design is present on both faces. 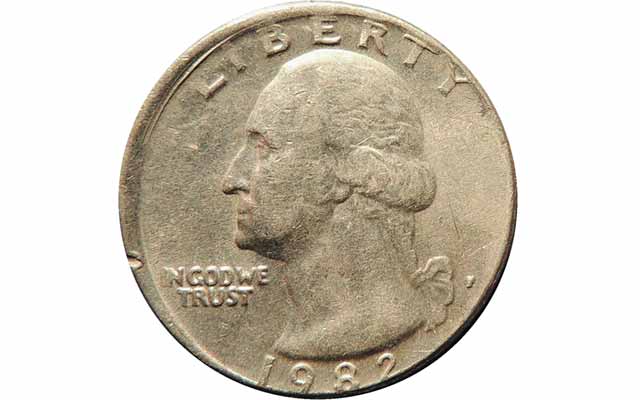 The word LIBERTY and the date hug a very thin design rim in this 1982-P Washington quarter dollar. As a result, it didn’t take much of a misfeed to generate an off-center strike.

The following is Mike Diamond's Collectors' Clearinghouse column from the July 20 issue of Coin World:

When a planchet is fed into the striking chamber, it’s supposed to be perfectly centered over the anvil die. This positioning is ordinarily enforced by the surrounding collar, but it often holds even when the collar is not deployed.

An unconfined planchet that is perfectly centered when struck becomes an oversized coin known as a broadstrike, sometimes called a “centered broadstrike”(most hobbyists omit the modifier).

Three factors determine whether a poorly-centered planchet becomes an uncentered broadstrike or an off-center strike. These are (1) the extent of the misfeed, (2) striking pressure, and (3) design.

The extent of misfeed is calculated as the maximum radial distance from the edge of the planchet to the internal margin of the coin’s unstruck crescent. The measurement is then converted to a percentage of the coin’s standard diameter.

Striking pressure is a function of ram pressure (the tonnage delivered to a planchet of normal thickness) and minimum die clearance. The smaller the clearance the greater the expansion.

The illustrated 1999 Lincoln cent protruded much farther outside the striking chamber, but the entire design is present on both faces, with room to spare. The greater striking pressure caused the planchet to expand dramatically in all directions, with the portion lying between the dies spreading to cover both dies.

If the extent of misfeed and striking pressure are held constant, then design comes into play. When peripheral design elements are more distant from the design rim, it takes more of a misfeed to generate an off-center strike. A wider unstruck crescent is also necessary when the design rim is wide, as on our Sacagawea and Presidential dollars. Some world coins, like the Indonesia 100-rupiah pieces minted between 1999 and 2008, have relatively uncluttered designs, and a misfeed that coincides with an empty area on both faces may generate an uncentered broadstrike even when there’s a significant misfeed.

Reverse these design properties, and the odds of an off-center strike increase.

For example, it doesn’t take much of a misfeed to generate an off-center strike in a 1982 Washington quarter dollar. A 1982-P example provided by William Wilson was only slightly uncentered when struck, but this was enough to generate an off-center strike. This is because the design rim is very thin and there’s no gap between it and peripheral elements on the obverse face (LIBERTY and the date). In later eagle-back quarter dollars, the design rim is a bit wider and there is a gap between peripheral obverse elements and the design rim.