The Joys of Collecting: New book on shell cards nears 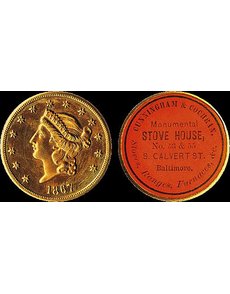 This week I invite you — if you own one or more tokens known as shell cards — to contribute to a book I am writing and which is within a few weeks of completion.

While many series in American numismatics have been studied in detail, including in books, shell cards are an exception. These tokens are made with a brass encasement or shell, like an encased postage stamp.

The obverse can be of a circular mirror, or the motif of a Coronet gold $20 double eagle dated from 1867 to 1870 or Seated Liberty dollar of 1867 to 1869, or other motif such as a bison, eagle, Washington portrait and the like — a diverse panorama.

As silver dollars and double eagles had not been in circulation since early in the Civil War, these coin-appearing tokens were especially highly prized by their recipients.

The reverse of a typical shell card, in embossed brass or colorfully printed on a cardboard disc, bears an advertisement.

Shell cards were issued nationwide from California to Maine, especially from the East and Midwest. Most are 34 to 39 millimeters in diameter.

Although these have been chronicled here and there since Robert W. Mercer’s Numismatic Directory of 1881 and, some years ago, in a series contributed by Ralph Mitchell and Russell Rulau to the TAMS Journal, published by the Token and Medal Society, they have never been studied in depth.

The new book will be in full color, hundreds of pages in length, and will describe more than 1,000 different varieties.

Auction prices and estimated values will be given for many pieces.

The late token specialist Steve Tanenbaum once said with a touch of humor: “A common shell card is one for which two pieces are known.” In reality, many varieties are unique, but for the typical issue, from two to five are known. Only a few are known to the extent of a dozen or more.

Values are modest at present, and even a rarity in Extremely Fine or About Uncirculated is apt to sell for no more than $200 or $300.

As to how you can help, if you have even a single example and will send me scans of both sides, I will respond, tell you how rare it is, and if I don’t have an image or don’t know of it, will ask for details (and give you a credit line).