High grades are magnets to investors 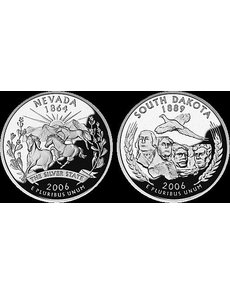 Proof 2006-S Nevada and South Dakota State quarter dollars are from a favorite series of mine. Nearly all examples grade Proof 69 or Proof 70 with deep cameo contrast.

Before the era of certified coins, which began in the late 1980s, unattractive coins would have few buyers, as most knowledgeable buyers stayed away from them.

Probably 90 percent of serious collectors back then were sophisticated. They had to be, as there were no grading services, and opinions of grading standards varied widely.

Investors were plentiful, however. To be safe they bought bank-wrapped rolls of copper-nickel (sometimes) and silver (always) coins from 1934 to date, Proof coins from 1936 to date, commemoratives (nearly always found Mint State), and bulk Uncirculated silver dollars and gold coins. These formed a very large part of the coin business.

Then came more than 100 grading services (most of which are now gone), today led by Professional Coin Grading Service and Numismatic Guaranty Corp., along with ANACS and Independent Coin Graders.

Silver and gold coins of all eras are in demand, copper coins less so. No longer is an investor timid about buying just about any federal coin listed in A Guide Book of United States Coins (the “Red Book”), especially if it is certified Mint State or Proof 63 or better.

While a sophisticated specialist will endeavor to obtain coins with sharply struck features and excellent eye appeal, investors do not know about such things (unless a coin is marked full bands, full head or whatever — applicable to only a few series). As I mentioned last week, an unattractive certified coin priced at a discount will be a magnet to investors.

Here is the icing on the cake. Specialists know that just about every Proof or Mint State coin sold at a premium by the U.S. Mint in the past decade grades 69 or 70. In fact, a modern commemorative coin as “low” as 65 would be a great rarity as would an American Eagle silver or gold coin in Proof 65.

Investors have been told that 19th century and early 20th century coins, if Proof 69 or 70 and Mint State 69 and 70, can be worth huge amounts of money compared to 65s. So they flock to buy modern coins in ultra grades, not stopping to think that nearly all are very common and have no relation to the rarity or market for early issues! Untold millions of “new” dollars keeps pouring into the market.

Q. David Bowers is chairman emeritus of Stack’s Bowers Galleries and numismatic director of Whitman Publishing LLC. He can be reached at his private email, qdbarchive@metrocast.net,
or at Q. David Bowers LLC, Box 1804, Wolfeboro, NH 03894.