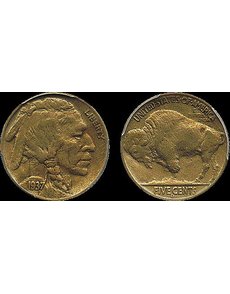 Some key Indian Head 5-cent pieces in circulated grades, such as the 1937-D Three-Legged Bison variety, have shown big price increases in the last decade. This EF-40 example brought $900 at a February auction.

The past decade has seen a steady increase in prices for many better-date Indian Head 5-cent coins in circulated grades.

Typically collectors think of “investment quality” coins as being only solid high-grade Mint State pieces. But a look at key circulated Indian Head 5-cent pieces shows that many have enjoyed solid gains in value over the past decade. One reason for this is that third-party certification has made the scarcity of many of these issues in problem-free grades more apparent as collector coins in a broader range get certified.

Another overdate has not fared as well. The 1914/3 variety is a relatively recent discovery that remained hidden in plain sight until 1996. The overdate is not as strong as on the 1918/7-D 5-cent coin, and prices in most lower circulated grades have remained stable over the past decade. In grades of Extremely Fine and finer the prices for the 1914/3 coin have moved upwards. At a January 2012 David Lawrence auction a Numismatic Guaranty Corp. EF-40 example realized $920, while Heritage sold comparable examples in 2006 and 2000 at $690 and $675, respectively.

The famed 1937-D Indian Head, Three-Legged Bison variety has seen an explosion in price over the past decade. A decade ago a nice Fine 12 example would cost around $300, but today at auction these routinely bring $550 and more. Nice EF-40 examples used to be at the $450 level, but today handsome examples can reach the $1,000 level.

The run-up in prices for circulated examples is not limited just to varieties. The 1913-S Indian Head, Bison on Plain (Type Two) 5-cent piece has long been expensive, but a decade ago, while nice Fine examples might bring $200, solid Extremely Fine pieces would sell at the $300 level. Today the jump is more dramatic, with nice Fine 12 examples trading at the $350 level, Very Fine 20 coins moving for $400 at auction and EF-40 examples selling at the $500 level.

Not all keys have shown tremendous growth. The 1924-S coin is a series key in grades finer than Very Fine, yet it has been fairly stable in price. A decade ago EF-40 examples traded at the $800 level and at a March 11, 2012, Heritage auction one graded PCGS EF-40 brought $920.

Thankfully, prices have remained stable and reasonable for those searching for great type coins such as the 1913 Indian Head, Bison on Mound (Type One) or the 1938-D coins. Exceptional examples of 1913 Bison on Mound 5-cent pieces in MS-65 can be purchased at the $125 level while handsome brilliant MS-65 1938-D Indian 5-cent pieces sell at online auctions for as little as $35. ¦