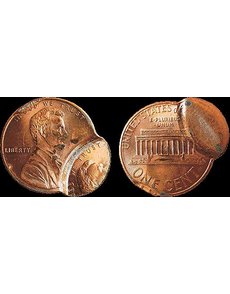 In this undated Lincoln cent a normal first strike was followed by a saddle (tandem) strike. The smaller of the two off-center strikes is weak, while the other is much stronger due to the presence of an underlying planchet. 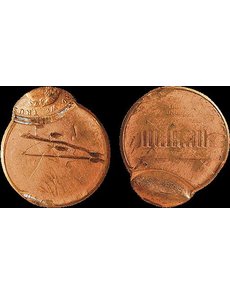 This Lincoln cent planchet received a weak first strike as it sat within the collar. It was followed by two overlapping saddle strikes. An intrusive planchet increased the effective striking pressure at one pole. 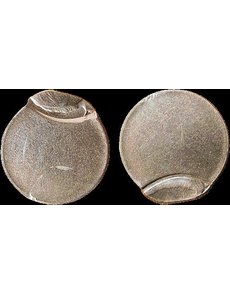 This undated Roosevelt dime may or may not be a saddle strike. One pole — die-struck on both faces — is very weakly struck. The opposite pole shows a much stronger strike owing to the presence of an underlying coin.

The gap separating a couplet was so narrow that a planchet or coin could straddle that gap and be struck simultaneously by both die pairs. These tandem strikes are called saddle strikes, reflecting the shape of the hump that often develops in the unstruck interval between the off-center strikes.

In a dual or quad press, all the dies are linked to a common mechanism and thus operate in synchrony. If a malfunction interferes with normal die approximation, all the connected die pairs would be expected to produce equally weak strikes. Most of the time, however, a low-pressure saddle strike will show asymmetrical strength because the excess space in one striking chamber is taken up by an intrusive planchet or coin.

Illustrating this kind of asymmetry is a Lincoln cent in which a normal first strike was followed by a saddle strike. We can tell this is a saddle strike by the head-to-head orientation of the two off-center obverse designs, which make their closest approach at the 1:00 position typical of cents minted between 1980 and 2001. The minimum separation between the two off-center strikes also falls within the normal range.

The smaller of the two off-center strikes is die-struck on both faces and is weak. The larger, stronger strike is uniface (struck against an underlying planchet). The intrusive planchet took up the excess space between the dies, boosting the striking pressure in this area.

Since the first (centered) strike was of normal strength, it would appear that something interfered with normal die approximation after that strike was delivered.

Our second Lincoln cent, carrying the partial date 20__, shows four visible strikes, with a fifth strike implied by the tandem nature of the off-center strikes. Here a very weak but perfectly centered first strike was followed by two closely overlapping saddle strikes. As with our first example, the off-center strikes show a head-to-head orientation at the 1:00 position; the minimum separation between the first pair of tandem strikes is 12.01 millimeters. The weakness in the initial strike shows that the minimum die clearance was already excessive.

Two small off-center strikes — the first clearly die-struck on both faces — overlap Lincoln’s shoulder. Both strikes are quite weak. At the opposite pole we see a single visible off-center uniface strike that is quite strong. Again, an underlying planchet took up the excess space between the dies, increasing the effective striking pressure.

Our final example comes from Alexander Ness. I’m not entirely sure this undated Roosevelt dime is a saddle strike, as the closest point between the two off-center obverse designs is at 12:00 rather than the 11:00 position typically seen in this denomination. Furthermore, the minimum separation between the two strikes seems intermediate between the very narrow gap that prevailed before the late 1970s and the more generous separation that prevailed afterward.

What we can establish is that one pole displays a very weak strike that is die-struck on both faces. Here the obverse design is limited to Roosevelt’s brow and eye atop the planchet’s proto-rim and a weak outline of the rest of his head within the body of the planchet. The reverse design shows up only on the proto-rim where we see the PLU of PLURIBUS.

The off-center strike at the opposite pole is considerably stronger. The obverse face is die-struck and shows the top of Roosevelt’s head and the Y of LIBERTY. The reverse face shows a mirror brockage of the same portion of the obverse design. It would appear that an underlying coin took up the excess space between the dies. The outer edge of the struck tongue of metal is flattened and serrated. It’s a chain strike that carries the impression of the reeding of another dime that lay adjacent to this planchet when the off-center strike was delivered.