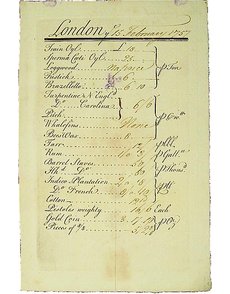 While not exactly numismatic, this 1757 London price list helps paint a more complete image of coins and trade in the 18th century.

Recently, the curator of the American Numismatic Association’s Edward C. Rochette Money Museum, Douglas Mudd, asked for my assistance developing a small exhibit of numismatic items relating to the French and Indian War. The topic was inspired by the profound place the ANA National Money Show’s venue — Pittsburgh — played in the worldwide conflict.

Started in 1754 when a group of American troops led by a young George Washington (then a major in the Province of Virginia’s militia) confronted a French army in western Pennsylvania, the war became the deciding chapter in the long Colonial history of North America. It spread to the world’s oceans, to Europe, Asia and even the coast of Africa, profoundly altering territorial maps around the globe.

The task I was given was this: Assemble a small collection to touch on all aspects of the war’s history. It became a wonderful interdisciplinary exercise that represents an intriguing way to collect and connect all manner of Colonial Americana.

The exhibit includes coins, like an example of the Spanish 2-real coin called “pistareens” that Gen. Edward Braddock specifically requested for use of his troops in North America.

A Pillar dollar is an obvious inclusion, as the coin of the realm throughout colonial North America and the world.

The French and Indian War was commemorated contemporarily with dozens of medals. We couldn’t go without something French — a jeton promoting the wealth to be acquired in the Canadian fur trade — and something Indian, such as a bronze trade medalet given as part of fur trade exchanges by British agents in Pennsylvania.

Paper is also easy to include in such a collection, from currency authorized to help pay for the war effort to bills of exchange that helped make international trade easier in the age of empire.

The same kind of broad interdisciplinary collection could celebrate almost any event in or aspect of early America.

With so many different things to collect, somehow building a collection of just coins, just medals or just paper seems akin to collecting with blinders on if history is your primary motivation.

No matter what your interest is or what your numismatic focus is, associated items can help you define a more vivid vision of what your collection could be. These objects can be both numismatic and non-numismatic.

Define the chapter of history that most fascinates you, then build out your collection like you might furnish a room, piece by piece, with items that match and fit and, for interest, some that don’t.

It’s your collection — have some fun with it.