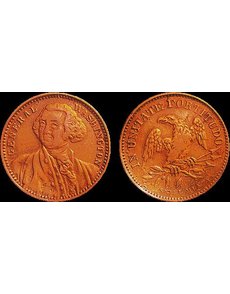 A reader’s mystery piece featuring George Washington may be a copper game counter dating back to the 1860s. A specialist on pieces of this type would be needed to ascertain its authenticity and its degree of rarity.

I purchased this token in Florida. It is copper, has a diameter of 19 millimeters and weighs 2.63 grams. Can you give me some information on it?

Coin World’s “Readers Ask” does not authenticate numismatic items. Ultimately, the piece in question will need to be examined by a specialist to determine if it is genuine. However, “Readers Ask” can provide some background information on similar pieces.

The item in question appears to be a “game counter” or “play money,” similar to a type originally produced in the 1860s.

The pieces were minted by Ludwig Christian Lauer of Nuremberg, Germany.

According to Medallic Portraits of Washington by Russell Rulau and George Fuld, the portrait of George Washington on the obverse of the counter was “taken from a print by Giuseppe Longhi, the Italian engraver, executed in 1817 from his own sketch — a combination of the [John] Trumball and [Gilbert] Stuart heads — through an extremely close copy engraved by G.G. Felsing in 1824, while a student under Longhi.”

If Mr. Snavely’s piece is authentic, his would be Type I.

In addition to the two types, these pieces have different compositions, edges, reverses and diameters — all resulting in varying degrees of rarity, ranging from Rarity 1 (common) to R-9 (two to four pieces known).

Some Type I counters have a copper composition, in addition to brass and gilt bronze.

The 19-millimeter diameter of the piece in question also falls within the specifications for the Type I pieces.

The Latin legend on the reverse, IN UNITATE FORTITUDO, translates to “strength in unity.” Some counters feature the legend SPIELMARKE or SPIEL MARKE (“game counter”) on the reverse. Mr. Snavely’s piece says SPIEL MÜNZE (“play coin” or “play money”). Both legends are used on Type I pieces.

The eagle on the reverse of some Type I pieces has a shield covering its breast, while some do not; Mr. Snavely’s piece does not feature a shield.

His piece also appears to show evidence of die breaks, especially on the reverse, that may aid an expert in determining the classification and rarity of this piece.