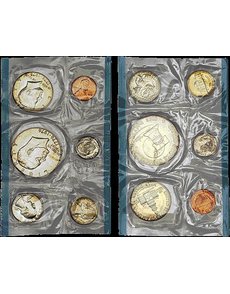 Pictured are the obverse and reverse of the 1975 Uncirculated Mint set featuring coins from the Philadelphia Mint. The dollar, half dollar and quarter dollar are dated 1776-1976, while the cent, 5-cent and dime are dated 1975.

I have two 1975 Proof sets. In one set, the coins are in red felt, cased in a black plastic case. The other set is sealed in a plastic wrap. Note the coins in the second set do not have the S Mint marks. Can you give me some information regarding these sets?

From Mr. Benhoff’s description and the image provided, it appears he possesses not two Proof sets but a 1975 Proof set and a 1975 Uncirculated Mint set.

The 1975 Proof sets were sealed in a clear plastic case with the coins framed within by a red, felt-covered paper insert, all contained within a black plastic frame. The Proof coins bear the S Mint mark of the San Francisco Assay Office.

Owners of a 1975 Proof set should be sure to take a close look at the Roosevelt dime in the set. If it doesn’t have an S Mint mark, it should be submitted to an expert for authentication. Why? Two known 1975-S Roosevelt, “No S” Proof dimes are known, and one of them sold for $349,600 in an Aug. 18, 2011, Stack’s Bowers Galleries auction.

The 1975 Proof and Uncirculated Mint sets are also interesting as they contain the dual-date 1776-1976 Eisenhower dollar, Kennedy half dollar and Washington quarter dollar. These coins bear commemorative reverses in honor of America’s Bicentennial. The only circulating U.S. coins struck with the date 1975 are the Lincoln cent, Jefferson 5-cent coin and Roosevelt dime.

The same holds true for the 1976 Proof and Uncirculated Mint sets, whereas the cent, 5-cent coin and dime are dated 1976 and the dollar, half dollar and quarter dollar again bear the 1776-1976 dual date.