Indian Head cents circulating around Houston could be worth $1,000 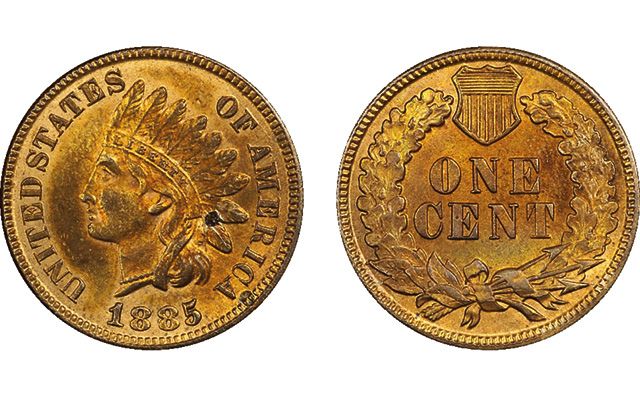 One hundred Indian cents in worse condition than this MS-63 1885 example will be put into circulation around Houston in early December for a treasure hunt put on by the Greater Houston Coin Club.

What does a collector need to turn a low-grade cents, valued at less than $10, into more than $1,000 in December?

A keen eye and a little luck.

The Greater Houston Coin Club, U.S. Coins Inc. (Houston), and Universal Coin & Bullion (Beaumont, Texas) are sponsoring the “Treasure Hunt for the Lucky Pennies," during which 100 Indian cents dated between 1883 and 1909 will be subtly entered into circulation around the Houston area, then hopefully find their way to the Houston Money Show, where a sizable cash prize could await their finders.

Last year, only five cents—1914-D Lincoln cents—were entered into circulation. None of them were brought in.

“If we don’t have a winner or winners this year it won’t be our fault,” Houston Money Show chairman Gail Brichford said.

Here’s how the promotion will work, in five quick steps:

Every one of the 100 coins (all of which were odnated by U.S. Coins, Inc.) will have a different number between 1 and 100 engraved onto its obverse, before they are “dropped” all over the Houston metropolitan area via purchases made at unknowing merchants by those running the treasure hunt. The drops will take place on Sunday, Nov. 30, and Monday, Dec. 1, in the area bordered by the towns of Conroe to the north, Galveston to the south, Katy to the west, and Willisville on the east.

"To make it easier to find the 100 'Lucky Pennies,' the show will provide the media with a list of 47 of the locations (city/town/mall) where the coins will be dropped," Schwenker said in an email.

The coins will make their rounds until, the sponsors hope, those with a numismatic eye spot and hold onto them before 5 p.m. on Saturday, Dec. 6, the last day of the Houston Money Show.

3.) Coin-finders bring the Indian cents to the Houston Money Show

At the show, which will be held at the George R. Brown Convention Center, those with one of the numbered pennies will be given a $25 gift certificate to any booth at the show. The first five coin-finders to bring their coin to the show will receive an "early-returner bonus" of $200, as well. After five have been brought in, the returner bonus will go down to $100.

"If the first participant doesn’t hit the number on his/her coin on the first chance, there is a second chance, this time for $250, and then a third chance for $100,” a release from the Greater Houston Coin Club reads. "The next four callers/returners will go through the same sequence of chances until the $1,000, $250 and $100 bonuses are claimed or we run out of individuals who find the lucky pennies.”

"This promotion is designed to promote public awareness of and attendance at the Houston Money Show and is sponsored jointly by Universal Coin & Bullion, Inc. and U.S. Coins, Inc.,” the Greater Houston Coin Club release reads. "They have our sincere thanks!"

Those seeking more information about the treasure hunt should call 832-909-5497.