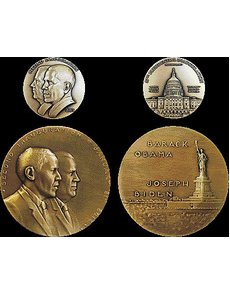 Currently available are medals bearing sculptor Amy Kann’s obverse and reverse designs that were not adopted for the official medal. The bronze version is shown. The Kann medals are being struck by the same private mint that produced the official medals.

The three official 2013 presidential inaugural medals for President Barack Obama were pulled from sale Feb. 1 on the Store2013pic.org website, but the silver version went back on sale several days later.

In addition, at least one artist whose designs were not adopted for the official presidential inaugural medal has commissioned medals of her design to be struck by the same private mint that is producing the official medal.

On Feb. 1, official bronze and silver medals and the three-piece sets, which include a gold version, were removed from sale from the inaugural website without explanation. Coin World called the toll-free customer service line for the Store2013pic.org website and was informed by the salesperson the medals were removed from sale because the inaugural committee had sold out its available inventory.

However, the silver medal reappeared for sale at the website sometime on Feb. 7 or 8.

The reverse design — created by an internal design team at Medalcraft Mint — features a rendition of the United States Capitol at center.

H. Joseph Levine of Presidential Coin & Antique Co., Clifton, Va. (www.inauguralmedals.com/inaugurals/levine/sales.html), is continuing to offer for sale all three product options for the official medal, saying he has been successful with sales of the silver medal and three-piece sets despite the retail price.

Levine has been offering official presidential inaugural medals and other medals for four decades. Visit his website for specific pricing information. Levine said orders placed with him for the official silver medal and the three-piece set are being shipped directly from Medalcraft to customers who order them.

Pennsylvania sculptor Amy Kann (www.amykann.com/), who also submitted medal designs commissioned by Medalcraft, but whose designs were not selected for the official medal, is having the private mint strike her designs. The Kann medals are offered in bronze, silver-plated bronze, gold-plated bronze, and .999 fine silver versions. All of Kann’s medals will be 2.75 inches in diameter, according to the artist, and the silver version will be similar in weight in silver to the official presidential inaugural medals.

Kann’s obverse features conjoined busts of Obama and Biden facing right. The reverse depicts a rendition of the Statue of Liberty.

The costs associated with producing the Kann medals were initially underwritten by Kickstarter.com, which is reimbursed by a percentage from subsequent sales. Details of the venture can be found at www.kickstarter.com/projects/amykann/obama-2013-inauguration-medal.

Levine also purchased a quantity of Kann’s medals for resale, she said. Kann said she will also have her medals available through other online outlets. ¦