In double strikes, preservation of first strike matter of 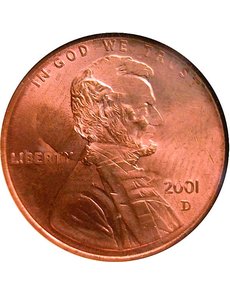 This 2001-D Lincoln cent received a very weak second strike. The image of Lincoln produced by the second strike is vertically oriented in the photo. 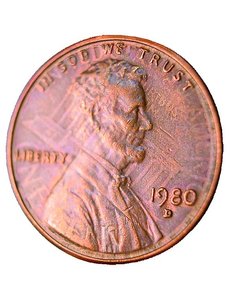 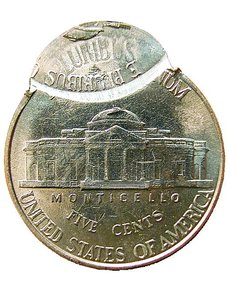 Unusual coarsening of metal crystallites preserved the outlines of the word pluribus on this double-struck 1999-D Jefferson 5-cent coin. 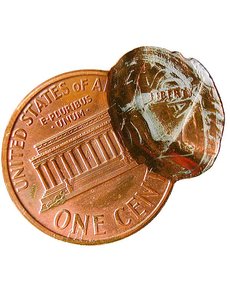 Dies are much harder than coin metal and they are applied with many tons of pressure.

In most double strikes, evidence of a first strike is largely or completely erased when a second strike is delivered, provided that there is direct contact between the die face and the coin. The last provision is important, because anything that softens the impact of a die will tend to aid the preservation of first-strike details. This could be an intervening planchet, the thin floor of a die cap or even a thick layer of “grease.”

Even when there is direct die contact, there are times when first-strike details survive the impact to an impressive degree. Such coins are highly prized by collectors because of their rarity and the resulting eye-catching jumble of intermingled design elements.

First-strike elements can resist obliteration through several different mechanisms. One of the most common is the delivery of a weak second strike. The illustrated 2001-D Lincoln cent was double struck in-collar, with an approximate 45 degree clockwise rotation of the coin between strikes.

The weak second strike could have been caused by insufficient ram pressure (the tonnage delivered to a planchet of normal thickness). A more likely cause is insufficient die approximation (excessive minimum die clearance). During the second strike, something prevented the two dies from approaching each other closely enough to deliver a forceful strike.

The illustrated 1999-D Jefferson 5-cent coin shows a strong, off-center second strike that is die-struck on both faces. Surprisingly, the word pluribus has resisted obliteration. The outline of each letter is preserved by an unusual coarsening of the surrounding field. While metal crystallites usually fuse under compressive or bending stresses (producing a matte texture), seldom does this occur to any great extent at the margins of design elements. But here, the compression of the first-strike letters and the surrounding metal generated this coarsened, slightly recessed surface. The obverse face does not show this effect.

On rare occasions, copper-plated zinc cents develop a split plating afterimage as seen on this undated cent with a flipover double strike. The copper plating split at the margins of the letters erica when the die crushed them on the second strike. The second strike on this coin was particularly strong, as this is also a uniface strike (struck against a planchet on the opposite face). However, most uniface second strikes do not show a split plating afterimage on the die-struck face.