The Joys of Collecting: History, subtleties not on slabs 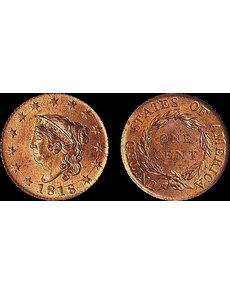 Many new dealers who know only certified coins and are light on overall knowledge might not be able to tell much about the person or subject mentioned in the column with a connection to this Mint State cent.

For the knowledgeable, cherrypicking opportunities exist galore among certified coins, enough so that some dealers make most of their living this way. They find certified coins that are, say, high-end Mint State 64 and resubmit them once or several times in an effort to score a home run MS-65 grade.

Rare die varieties also can be found among certified coins, especially early slabs of Numismatic Guaranty Corp. and Professional Coin Grading Service. Some slabs simply list the variety according to A Guide Book of United States Coins. Rare or other technical variety identified in a specialized reference can be worth multiples more.

Go back to before 1986 when PCGS started: No slabbed coins with certified grades. Grades varied all over the place. In Coin World and elsewhere a coin might be advertised as MS-65+++, whatever that meant. To buy coins, a professional numismatist had to know how to tell counterfeits from the genuine. John J. Ford Jr. remarked that at a national coin show more than 50 percent of the “1916-D” Winged Liberty Head dimes he saw were fakes.

True, if a dealer bought a fake, he might get a refund from the seller, but often this involved spending thousands of dollars in legal costs for expensive pieces. Other times the buyer just swallowed the loss.

A dealer needed to know how to grade. This was an important part of the learning curve. The American Numismatic Association offered two summer courses — basic grading and advanced grading. I used to send a lot of our staff members there to learn.

Today, a dealer does not need to know anything at all about grading or authenticity. There is no need to do much pricing research either, as 101 guides are available.

Accordingly, someone can start today and be in business right away! Of course, this means a lot of dealers are clueless as to in-depth knowledge of numismatic tradition, history and subtleties.

Or spend a minute on the numismatic significance of Machin’s Mills, Nichols Hoard, the Mint at The Dalles, Castine Hoard, Kellogg & Humbert, Bangs & Co., the Scovill Manufacturing Co. or what a milling machine does at the Mint? Probably not many.

This is progress, I suppose.

By the way, James Swan Randall of Norwich, N.Y., had a huge hoard of copper cents dated 1816 to 1820, the origin of the illustrated coin.