In 1860 interest was high in items related to George Washington 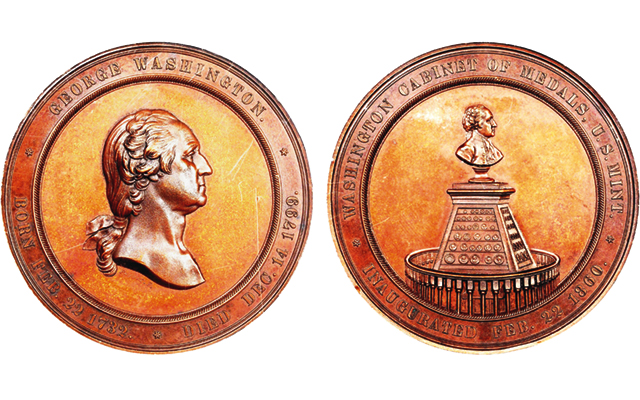 Last week I told of the Mint gearing up for an anticipated record year of selling Proof coins, restrikes, and other items. The hobby was in a rapid state of growth in 1860, but then some growth seemed to have come to an end that year.

For reasons unknown today, the American Numismatic Society, established in March 1858 and a dynamic presence that year and in 1859, simply disappeared!

Similarly, its leading light, Augustus B. Sage, the leading auction cataloger in 1859 with three sales, seems to have closed up shop.

(In 1864 there was a reawakening, and the American Numismatic and Archaeological Society, a new group, was formed and assumed part of the original name.)

Today, in 2014, the hot tickets in the marketplace include common modern coins certified in ultra-high grades such as Mint State 69 and MS-70, classic scarcities and rarities in high grades as well (say MS-66 and MS-67), and, believe it or not, Colonial coins, tokens, and medals, and obsolete paper money. This is, of course, a short list.

In 1860 the firecracker series was Washington tokens.

For two or three years, Mint Director James Ross Snowden had been buying and trading rarities for pieces needed for the Mint Cabinet (which evolved into the National Numismatic Collection now in the Smithsonian Institution).

The interest in Washingtoniana was driven in part by a nationwide campaign headed by statesman, orator, and erstwhile Harvard president Edward Everett, who gave many speeches about the Father of Our Country and why citizens should rally to support the preservation and restoration of Mount Vernon. Prices of Washington tokens and medals had multiplied in recent years.

On Washington’s birthday, Feb. 22, a grand ceremony was held at the Mint to dedicate the Washington Cabinet, a special display. A special medal was struck for the occasion, from dies engraved by Anthony C. Paquet.

Measuring 60 millimeters, it depicts Washington on the obverse and a display of medals on the reverse. The Washington Cabinet medal remains popular today, and a nice example is apt to cost in the range of $450 to $650.

In 1861, a 203-page book by Snowden was published, A Description of the Medals of Washington. Illustrated were items relating to the title subject as well as certain other pieces, all from the Mint Cabinet.

In 1860 four men ran for president. Tokens and medals related to them were wildly popular with numismatists and the public.