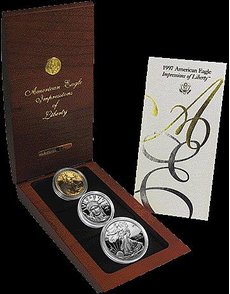 I read Coin World and collect silver American Eagles. I was reading John Mercanti’s book, American Silver Eagles. In the book, Mercanti says that the 1997 Impressions of Liberty set has no Mint mark. I am looking to buy this set, but see some of the platinum coins have “P” or “W” in the set. I know something is wrong with this picture. I know the W is wrong, but not sure about the “P.”

What Mint mark should I look for on each coin in this Proof set?

The three-piece Impressions of Liberty coin set, which includes an example of the Mint’s inaugural Proof American Eagle 1-ounce platinum coin, was offered beginning on June 6, 1997.

The coins were housed in a special hardwood case, with each coin resting in a hard plastic capsule. Each set was accompanied by a certificate of authenticity that Philip N. Diehl, director of the U.S. Mint, signed and numbered.

U.S. Mint officials reported June 27, 1997, that sufficient orders had been received to exhaust the maximum release of 5,000 Impressions of Liberty sets. Mint officials claimed at the time that, had the ordering restriction of one set per household not been in place, the sellout would have been much sooner.

Buyers of the set who have held them since their original purchase could profit nicely if they were to sell them today, as the set retails currently at higher levels. A set sold on eBay in November 2013 for about $5,222 (the set was offered by an Australian seller). GreatCollections.com sold a set in March 2013 for $3,666.66.